An unexpected coalition between Five Star and the Democratic Party would be better than the alternative, but it would face formidable challenges 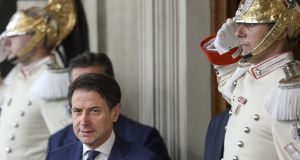 Giuseppe Conte, Italy’s premier-designate, arrives to speak during a news conference following a meeting with Italian president Sergio Mattarella at the Quirinale Palace in Rome on Thursday. Photograph: Alessia Pierdomenico/Bloomberg

Matteo Salvini thought he had pulled off a masterstroke when he brought down his own coalition government three weeks ago. Now it looks like a spectacular miscalculation. With opinion polls pointing to a surge in support for his far-right Lega party, Salvini moved to cash in on his popularity, assuming he could leave his coalition partner, the “anti-establishment” Five Star Movement, in his wake and lead a new administration propped up by smaller right-wing outfits.

Instead of triggering an election, however, Italian president Sergio Matterella consulted with the main parties and found a willingness to talk among an unlikely pairing: Five Star and the centre-left Democratic Party (PD). The idea that the two biggest groupings in parliament could overcome their mutual animosity at first seemed far-fetched, but late on Wednesday, after more than a week of negotiations, Matterella offered outgoing prime minister Giuseppe Conte – a technocrat considered close to Five Star – a new mandate at the head of a Five Star-PD coalition.

It will be another uneasy cohabitation between two long-time rivals

The breakthrough caps a remarkable three weeks in Italian politics. The deal is not done yet: the two sides still need to agree on a policy platform and a team of ministers, while Five Star’s pledge to put the proposed agreement with the PD to an online vote of its members could scupper the plan. But if the deal is done, Italy will have a markedly more pro-European government and one with a better chance of tempering Five Star’s worst populist impulses. The administration will be all the better for Salvini’s absence.

But any new coalition will face immense challenges. Almost immediately, it will have to face a difficult budget where at least €23 billion in savings must be found if the country is to avoid a rise in VAT and censure from the EU. It will be another uneasy cohabitation between two long-time rivals, meaning a long, stable arrangement is unlikely. And while Salvini will be out of power, he will also become the leading opposition voice in Italy, putting him in a strong position for a general election that may not be far in the distance.