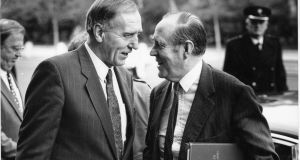 Former Northern Ireland secretary of state Peter Brooke confided in an Irish diplomat that he had a subscription for the republican newspaper An Phoblacht.

The Tory peer and then Cabinet minister under Margaret Thatcher also told the diplomat that Northern Ireland had “negligible strategic value” to London.

Files just released into the National Archives under the 30-year rule include a report sent back to Dublin by an unnamed Irish diplomat in the UK on conversations with political figures and civil servants at a meeting of the British-Irish Association in Cambridge in September 1989.

Brooke, who had just been appointed Northern secretary two months beforehand, was among those in attendance and with whom the diplomat spoke.

“It was quite obvious from private conversation as well as his public remarks that he is enormously proud of his Irish family background going back to the early 17th century,” the diplomat reported. “There were family properties in Cavan and Donegal, as well as what is now Northern Ireland.

“One of his family, Charlotte Brooke, translated Irish poetry and he promised to send me material about it.”

The diplomat reported that Brooke “appears to be a voracious reader, and was talking about a number of Irish and Irish-American magazines he was taking, as well as An Phoblacht.”

In his report to seniors in the Department of Foreign Affairs, the diplomat described the Northern secretary as “very knowledgeable on parliamentary history,” and added that he “had been making a special study of 1886 when the Second Home Rule Bill was introduced.”

In fact, 1886 was the year the First Home Rule Bill was introduced by prime minister William Gladstone in an attempt to create a devolved parliament for Ireland.

After it was defeated in the House of Commons, Gladstone introduced the Second Home Rule Bill in 1893, which was passed by the Commons but vetoed by the House of Lords.