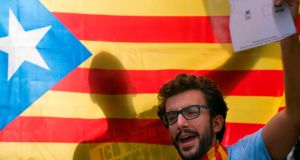 A man holds a Catalan pro-independence ‘Estelada’ flag during a demonstration in support of the referendum in Catalonia on Sunday. Photograph: Jorge Guerrero/AFP/Getty Images

Somebody should surely have told the Madrid government last week that using the Guardia Civil to stop Catalans casting ballots was a crass idea – and was exactly what the Catalan nationalists needed to present themselves as victims of anti-democratic repression.

But even if such advice had been given, there is little evidence that the right-wing Partido Popular (PP), and especially its prime minister, Mariano Rajoy, would have listened to any suggestion that deviated from its own rigid positions. On Monday, the highly regarded Madrid newspaper El País, no friend to Catalan nationalism (though no ally of the PP’s either) diagnosed Rajoy’s position as “aphasia”, the chronic communications disorder usually caused by a stroke.

But perhaps he will listen now. The images of Spanish police beating generally peaceful Catalan voters in Sunday’s controversial referendum have prompted even Rajoy’s allies to issue pointed reminders that state violence exacerbates conflicts. Taoiseach Leo Varadkar, a fellow member of the European People’s Party with Rajoy, made it clear yesterday that Ireland “respects the territorial unity of Spain, and does not recognise the results” of the Catalan referendum. But then he added: “It is clear from history all around the world… that when the state uses violence it leads to more division, disunity and radicalisation”.

Likewise, the European Commission accepted that the Catalan referendum was “not legal” and said that even if Catalonia could separate from Spain legally, it would “find itself outside the European Union”, which is music to Madrid’s ears. But the commission then called on “all relevant players to move very swiftly from confrontation to dialogue”. It added: “Violence can never be an instrument in politics”. It concluded by expressing trust that Rajoy will “manage this difficult process in full respect of the Spanish constitution and of the fundamental rights of citizens enshrined therein”.

On the evidence to date, this is not a trust that many, especially in Catalonia, will share. But it is not easy, either, to put any trust in the Catalan first minister, Carles Puigdemont, who hints that he will follow up his propaganda victory on Sunday with a unilateral declaration of independence. Neither he nor his followers have demonstrated any democratic mandate for such an incendiary decision. According to the Catalan government’s own claims, only 38 per cent of the Catalan electorate supported the creation of an independent Catalan republic in Sunday’s poll.

It is now vital that Puigdemont hears the voices of the very many Catalans who wish to remain within the Spanish state, and does not demonise them as “traitors”. And it is equally vital that Madrid learns to listen to the Catalan nationalist case, and recalls Winston Churchill’s dictum that “meeting jaw to jaw is better than war”.

1 Coronavirus: 396 more cases as public is urged to help protect ‘older and vulnerable’
2 The Sack of Balbriggan: The burning of a town that shocked the world 100 years ago
3 Coronavirus: Germany and Iceland look set to be taken off ‘green list’
4 Lockdown measures and rising anger in Madrid as Covid takes hold again
5 Chris Johns: We’re in for a triple whammy of Covid, Brexit and the US elections
Real news has value SUBSCRIBE