The presidency: the case for an election 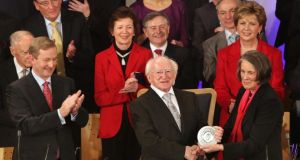 With President Michael D Higgins about to enter the final year of his term, the race to succeed him is about to begin. Or is it? In the closing stages of his 2011 campaign, Higgins said he would serve only one seven-year term. But that clarity has given way, in the past year, to a studied ambiguity on the subject. The president said last week that he would “make an announcement as to what my intentions are” after next summer, which would be just weeks from a potential election that is due in October 2018.

It is understandable that Higgins is reluctant to show his hand now. To do so would fire the starting gun on a year-long campaign that, irrespective of his plans, could overshadow his work as head of state. But he would be wrong to leave his announcement until after next summer. If Higgins has no plans to seek re-election, he should give potential candidates more notice. If he wants a second term, the only solid rationale for a late announcement is narrowly political: it would wrongfoot rivals and leave them with little time to fundraise. For a public figure whose role is above politics, that’s not a good enough reason.

A presidential election next year would be good for Irish democracy. It would also be good for Higgins himself, presuming he wants another term. As the only public office-holder who is directly elected to the position, a president has a unique connection to the people. That’s the source of his legitimacy and his power. Higgins received more than a million votes in 2011 – a record for a presidential candidate – and that mandate allowed him to pursue a presidency with a radical edge that occasionally put him at odds with government but never fell foul of constitutional boundaries. Higgins has every right to change his mind about a second term, but he should seek a mandate for it. Fourteen years is a long time. If Higgins were to serve a second term without an election, in 2025 there would be voters approaching their mid-30s who had never had a chance to vote for their head of state.

Ireland is faced with complex new questions about its place in a changing world. A presidential election would be a good place to talk about them

Presidential election campaigns can be chaotic, bitter and exasperating events. But they are also an important moment in the democratic cycle, and they have a way of stirring useful debate about the direction of the State. Higgins and his chief rival in 2011, Seán Gallagher, represented starkly different visions not only of the presidency but of Ireland itself.

But Higgins’s successful campaign, with its emphasis on morality and culture and its resonant appeal to “an older wisdom”, spoke to voters partly because it was rooted in its time. The message may not have lost its potency, but seven years later, in the era of Brexit and Donald Trump, Ireland is faced with complex new questions about its place in a changing world. A presidential election would be a good place to talk about them.

1 Mary Lou has to call for the smelling salts as SF councillor deals a knock-out blow
2 Dublin gangland figures involved in Drogheda feud that killed 17-year-old
3 Who was murdered teenager Keane Mulready-Woods?
4 Murdered and mutilated: Keane Mulready-Woods and the teenagers of gangland
5 St Michael’s conveyor belt showing no signs of slowing down
Real news has value SUBSCRIBE