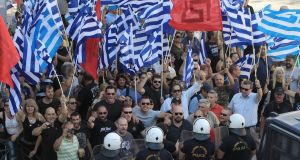 David Cameron says that if the referendum on British membership of the European Union returns a majority for leaving, it would take two years to negotiate the terms of a new relationship. Others argue that the process could take 10 years.

If the 10-year estimate is right, the assumption that there will be an EU to leave may turn out to be ill-founded. The union is facing a series of challenges coming together in grim coordination.

Last Saturday, WikiLeaks published the minutes of a meeting on March 19th at which two leading officials of the International Monetary Fund discussed how to deal with the Greek debt crisis. It has been popularly assumed that this crisis had come to an end last July when the Syriza government capitulated to the EU and accepted an austerity package more severe than measures rejected by a substantial majority of the Greek people in a referendum just a week previously.

The government of Alexis Tsipras was humiliated, the result of the referendum tossed away like a used tissue and the Greek people told to tighten their belts another notch. Who could ask for anything more? The IMF, as it happens.

The officials involved in the March meeting were Paul Thomsen, head of the IMF’s European section, and the fund’s “mission chief for Greece”, Delia Velkouleskou. The meeting concerned the possibility of the Greek difficulty escalating into another full-blown crisis. Fresh austerity measures were needed, the two officials agreed – specifically, raising taxes, cutting pensions and reducing working conditions.

Thomsen complained that the Greeks “are not even getting close . . . to accepting our views”. Velkouleskou suggested that the Tsipras administration might climb down and swallow the bitter medicine “if they get pressured enough”.

As to whether the Greek people would placidly yield to pressure in the form of yet another forced reduction in their living standards, we may find out soon enough.

The Greek crisis reflects a broad rumbling beneath the surface. The notion of every country for itself is becoming the new common sense, in direct contradiction of the intended basis of the EU.

Crude nationalism is on the rise. In Greece, the anti-EU, anti-migrant, anti-Semitic Golden Dawn is taking easy advantage. Campaigning under a flag with a symbol resembling a swastika , the neo-fascist group recorded 500,000 votes in last September’s general election, 7 per cent of the poll, returning 18 MPs. Five years ago it was stuck on half a per cent, with no representation in parliament.

The numbers affected so far have been small. No violent resistance has been reported. It’s hard to see this continuing.

Huge numbers fleeing violence, poverty and oppression are massed at the borders of the union, fenced out with nowhere to go. They will keep coming, unceasing and uncontainable. They cannot be expected to huddle in camps dependent on frugal charity without complaint. We may all hope for a resolution without tear gas and worse. But only a cock-eyed optimist could be confident that this is how it will be.

The difficulty in handling debt problems and the needs of migrants is compounded by the thoroughly undemocratic nature of the EU. In the Guardian on Tuesday, former Greek finance minister Yanis Varoufakis recalled his attempts last year to find common cause with EU colleagues.

After he made a plea for an easing of the terms of the bailout, explaining that this was the devout wish of the Greek people as expressed in the recent election, German finance minister Wolfgang Schauble made a reply which should send shivers up the spine of every democrat: “‘Elections cannot be allowed to change the economic programme of a member state.’”

Varoufakis comments: “The true meaning is that sovereignty is passé unless you are the United States or China or maybe Putin’s Russia. Moreover, the Eurogroup, where most of Europe’s important economic decisions are taken, is a body which doesn’t even exist in European law, that keeps no minutes of its procedures and insists its deliberations are confidential – that is, not to be shared with the citizens of Europe. ”

There is no democratic redress for any of the problems afflicting the union. Discontent will either be bottled up or will erupt on to the streets.

The EU may not survive.