Eamonn McCann: State role in killings by IRA changes everything

What justification can be offered now for the conflict that saw almost 4,000 killed? 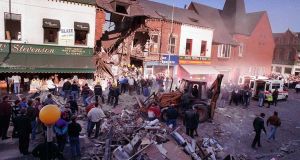 State agents appear to have played a part in the bombing of Frizzell’s fish shop on the Shankill Road in 1993 in which nine people died. Photograph: Pacemaker.

The question arising from this week’s allegations in the Irish News of the extent of British security service involvement in IRA killings is: What was that all about?

Collusion between MI5, the police Special Branch and military intelligence on the one hand, and the UDA and the UVF on the other, has been well documented. But the focus of the piece by Alison Morris was on the infiltration of the Provisional IRA by state agents and the claims about the role the agents played in IRA atrocities, including the bombing of Frizzell’s fish shop on the Shankill Road in 1993 in which nine people died, including two children and one of the bombers.

Former republican prisoner Dixie Elliot put the question plainly on Monday: “Were the Brits running both sides?” And if they were to any significant degree, what justification can be offered now for the armed conflict which saw almost 4,000 killed, tens of thousands maimed in mind or body and bereaved families still distraught as their search for truth is thwarted at every turn?

“Preposterous” might be applied also to the response of PSNI Chief Constable George Hamilton to a BBC Panorama programme last May detailing a series of paramilitary killings that state agents had helped plan and then cover up. Among these were the loyalist murder of Sunday World journalist Martin O’Hagan in 2001, the massacre of five men in a bookie’s on the Lower Ormeau Road in 1992 and the IRA slaughter of 10 Protestant workmen at Kingsmills in 1976. Former police ombudsman Nuala O’Loan told the programme the state agencies had “operated outside the rules . . . Hundreds and hundreds and hundreds of people died because those people . . . were not stopped in their tracks. Many of them were killers and some of them were serial killers.”

Responding to the reference to operating outside the rules, Hamilton explained: “There were no rules. There was no regulatory framework for handling of informants at that time.”

He did not explain how a “regulatory framework” might have stayed the hands of men intent on procuring murder and confident they’d get away with it.

In 2003 Cambridgeshire deputy chief constable John Stephens published a report on British intelligence and army collusion. His conclusions included that “the conflict in Northern Ireland was needlessly intensified and prolonged by the ‘disastrous’ activities of a core of army and police officers who colluded with the terrorists.” This “core” had “actively and deliberately helped a loyalist paramilitary group to kill Catholics”.

His investigation, he recounted, “faced obstruction from its very first day from members of the security forces”.

In relation to the 1989 UDA murder of solicitor Pat Finucane, Stephens said the killers had been “guided to him” by an agent of both MI5 and a British army undercover group, the Force Reaction Unit (FRU).

Despite the devolution of policing and justice, and pledges of “transparency” hailed as hugely significant at the time of the handover in 2006, neither the Policing Board nor the department of justice has any function in relation to police matters with a “security dimension”. The documents stipulate that any doubt about the applicability of this provision to a particular matter is to be referred to MI5 or the British government for determination.

Nor does the FRU appear to have suffered any loss of approval on account of its part in the Finucane and other murders. In 2007 the Daily Telegraph reported it had been deployed in Iraq since the 2003 invasion. Its agents “are trained to turn hardened terrorists into coalition spies using methods developed on the mean streets of Ulster” and was now “running dozens of Iraqi double agents”.

The British authorities were unperturbed by the murder spree committed in its name to the extent of exporting the modus operandi.

Whether anything will change as a result of this week’s allegations is greatly to be doubted. It isn’t rogue officers we deal with here, but a rogue state.

1 Gardaí believe men in Cork murder-suicide chose to let woman survive
2 James Bond actor Sean Connery dies aged 90
3 ‘In Crete I pay 70% of what I paid for a shoebox apartment in Dublin’s docklands’
4 Richard Ford: America could fail. I have never felt this way before
5 Supermarkets compared: How Dunnes, Lidl, Tesco and M&S measure up
Real news has value SUBSCRIBE