Eamonn McCann: Leicester City proves it is not all about the money 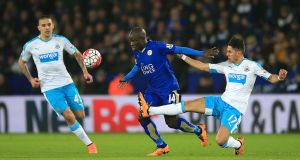 Leicester City’s N’Golo Kanté (centre) is arguably the best player in the Premiership at the moment. Photograph: Nick Potts/PA Wire.

As Leicester City fans sang their team through to the final whistle and a 1-0 victory over Newcastle on Monday night, the football world at last had to believe them.

They have been the form team since the first weeks of the season, topped the English Premier League table at Christmas, have shown no sign of faltering since. But hardly anybody other than blinkered devotees dared believe they really could do it. They stood at 5,000/1 in August.

Many who fervently wished them well have feared for the disillusionment certain to set in as delirium faded and the big battalions moved to reclaim the territory they had assumed was exclusively theirs.

The troubadour of the age, Mike Scott, as ever, put it best: “You were at the turnstiles/With the wind at your heels/You stretched for the stars/And you know how it feels/To reach too high/Too far/Too soon. . .” But far from plummeting to earth, Leicester are still flying high. One of the reasons all true lovers of football rejoice in Leicester’s soar through the season is that their trajectory runs directly counter to the prevailing assumption that economic clout is all that matters these days, that money doesn’t talk, it swears, telling uppity teams with ideas above their station to expletive off and take their allotted place at the bottom of the pile.

United commercial director Jamie Reigle presented Gulf Oil president Frank Rutten with a signed team shirt. The Texan reckoned this “a great honour”. The press release said the three-year deal was “Manchester United’s first global fuel retail and lubricants partner.” Gulf believes the sponsorship will help it “engage with United’s fans, including its 325 million followers in Asia, which Gulf sees as a major area of focus”.

United’s other global sponsors include Aeroflot, Chevrolet and Nissin Noodles. The club also offers bespoke sponsorship deals for particular regions. Chivita is “official supplier of soft drinks” in Nigeria, Bakcell “official integrated telecommunications partner” in Azerbaijan. And so on. The enclosure of football within soulless capitalism seems near-complete. And yet, and yet, there’s Leicester.

His striking partner, Algerian international Riyad Mahrez, was signed two years ago for €350,000 from French Ligue 2 side Le Havre. Central midfielder N’Golo Kanté came from unheralded Ligue 1 side Caen. He is arguably the best player in the Premier League at the moment. Hardly anybody had ever heard of any of them before they arrived at Leicester.

And there’s manager Claudio Ranieri. The reaction of every pundit in the land to Ranieri’s appointment was a mixture of disbelief and derision. He had had an up-and-down career, more down than up, managed 11 teams in Italy, Spain and England in his time, with, as they say, mixed results. He was sacked last year as manager of Greece after they were dumped from the European Championship, beaten home and away by the Faroe Islands. None of that touches on his reputation now. He’ll be known for as long as football is talked about as the man who took Leicester to the title.

At Chelsea between 2000 and 2004, Ranieri was disparagingly dubbed “the Tinkerman”, for fiddling about with team selection virtually every week. He blamed his mother, instancing Damien Duff. “When I don’t put him in the squad my mother, who’s 84, ‘phones from Rome and asks, ‘Why isn’t Damien playing?’ She kills me about it. What can I do?” You cannot not like him.

And you cannot not want Leicester to reach the top,to stand dizzy with pride on the pinnacle, shouting to the world that dreams do come true. Graham Souness is reported to have said that anyone who believed that Leicester could be champions was “living in Disneyland”.

Well, as the fairy godmother told a distraught Cinderella: “Because there are always impossible dopes/Keeping a hold of impossible hopes/Impossible things are happening every day.”

Leicester’s path to the end of the season is strewn with stardust. You’d have to have no feeling for football, and a heart of stone, not to will them along the last stretch of their path to glory.

4 Bank of Ireland to close 103 branches on island