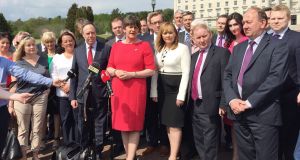 In April 2014, the then first minister of Northern Ireland, Peter Robinson, called on his party, the DUP, to stop looking for “lundies [traitors to the unionist cause] and start looking for converts”. Sinn Féin president Gerry Adams has made similar calls to draw unionists towards a united Ireland. So who is winning the battle for hearts and minds?

The 2011 census showed that Northern Ireland’s Catholic population had reached 45 per cent (up 1 per cent from the 2001 census). Based on projections, by 2037 there will be a Catholic majority, so one can see why people might think the unionists need converts.

Yet, although there is a correlation between denomination and voting in Northern Ireland elections, it is not as strong in the Catholic community as among Protestants. In the 2011 census, only a quarter of the population identified as Irish. Furthermore, in a 2015 opinion poll, only 27 per cent of Catholics supported a united Ireland.

At first glance it would seem that the DUP is succeeding in attracting Catholic support. In the 2011 Assembly election, the nationalist vote stood at 41 per cent. In this year’s election it fell to 36 per cent, despite an increasing demographic supposedly in favour of nationalism. The unionist vote in the same period rose slightly to 48 per cent.

Is this really down to a shift from nationalist parties to the DUP? Observers of nationalist politics and Catholicism, Martin O’Brien, David Quinn and Michael Kelly, have all pointed out other trends contributing to the shifting voting patterns in Catholic communities in the North.

They show a growing disillusionment with Sinn Féin and the SDLP, especially among more socially conservative Catholics who see both parties lurching to the left on issues such as abortion and the definition of marriage, and a weakening in support for State-funded Catholic schools.

But it is not clear if that disillusionment is driving Catholic voters towards the DUP (which has a more traditional stance on marriage and abortion) or if they are simply disengaging. The shift in voting may just be part of the normalisation process.

The Northern Ireland conflict was never as binary as some suggested. It was always more about equality, civil rights and respect than sovereignty. During the Troubles, as with any conflict, identities simply became more polarised. It is therefore to be expected that as part of the normalisation, identities will become more diffuse and this will cause shifts in society.

Such a flux in voting should be seen as a healthy sign of democracy whereby voters cast their ballot on a range of issues rather than just one. The sovereignty question can be left to a referendum.

These developments will pose problems for some parties as they try to find new stables. No longer can the nationalist parties simply rely on their traditional vote-bank and assume that all will follow regardless of how far they shift their policies away from the views of their electorate.

The DUP, despite its electoral gains, is not immune either. It might see similar pressures on its vote-bank as hitherto rigid identities thaw. Socially liberal Protestants might look elsewhere, but they seem more put off by the prospect of a united Ireland than Catholics are by the continuation of the union.

If the new First Minister and DUP leader, Arlene Foster, continues with the party’s missionary work to attract more Catholic voters, she will need to ask herself if the party is willing to break out of its traditional strongholds and to go where unionism has struggled to travel to date.

Timing will be everything. It took the second World War to bring an end to the toxic religious divisions in German and Dutch political parties with the formation of today’s Christian Democrats. Could Northern Ireland follow such a realignment and see a similar choice between socialism and Christian democracy?

Time will tell, and much will depend on how keen each side is to change in order to persuade and convert. For the DUP the first test might come in 2018 if Pope Francis visits Northern Ireland as part of a trip to Ireland for the World Meeting of Families. Many will be watching, including socially conservative Catholics. It could be the opportunity for true statesmanship.

Francis Campbell is vice-chancellor of St Mary’s University, London, and a former diplomat and British ambassador to the Holy See