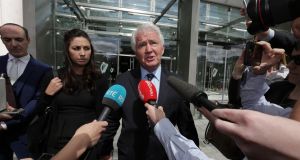 The Seán FitzPatrick trial was the longest criminal trial in the history of the State at 126 days and is expected to cost €3 million. Photograph: Collins

The collapse of the Seán FitzPatrick trial was a bad day for the Office of the Director of Corporate Enforcement (ODCE). However, calls for its abolition are premature and a knee-jerk reaction.

Then tánaiste and minister for enterprise trade and employment, Mary Harney, established the ODCE on 2001. This followed widespread corporate abuses such as the secret offshore “Ansbacher” bank accounts used in the 1970s- 1990s by wealthy Irish individuals to evade tax.

It was set up against a background of limited enforcement of civil or criminal law relating to breaches of the companies acts. For example, in 1997, only 13 per cent of companies had filed their annual returns on time.

Since the establishment of the ODCE , compliance with company law has improved immensely such that now almost 90 per cent of companies file their returns on time.

The ODCE has been proactive. Each year, it receives hundreds of reports from company liquidators, auditors, examiners, professional bodies and the general public. Each year, hundreds of company directors are restricted/disqualified by the courts. In addition, the ODCE issues cautions, statutory demands for information, directions, demands for accounting records and makes referrals to professional bodies. Thus, the ODCE has many achievements since its formation.

But there is a suspicion that the ODCE carefully selects who to go after. The small (wo)man. The easy meat. The low cost prosecutions. No doubt conscious of those accusations, the ODCE’s 2015 annual report flags a strategic shift to investigate more serious wrongdoing.

The reasons why the FitzPatrick trial went wrong are multiple and complex.

ODCE investigator, solicitor Kevin O’Connell’s shredding of evidence has grabbed headlines. But I question his role in such a high-profile trial and would be loathe to make him the fall guy.

Had he the qualifications, expertise and experience to lead such a prosecution? Why did the ODCE not employ a barrister, used to the cut and trust of criminal courtrooms, and familiar with the much higher standards of evidence required in criminal compared with civil trials?

Individuals in the ODCE, including former director Paul Appleby and lawyers acting for Ernst & Young were all involved in preparing the witness statements, leading Judge John Alymer to call them “statement[S] by committee”.

The current and former directors of the ODCE are civil servants. Given its interface between the corporate world and company law, should such an office holder be legally qualified? Should the director of the ODCE have hands-on court experience of prosecuting complex cases?

Meanwhile, arguments rage in the Dáil about the resourcing of the ODCE, which implicitly or explicitly translates into simple metrics such as the number of staff. I would argue that it is more complex and not simply a numbers game. Does the ODCE have the right kind of staff – not just in terms of qualifications and experience – but also temperament to objectively and robustly pursue corporate wrongdoing? Is the State offering packages that can attract suitably qualified people?

The Department of Public Expenditure and Reform has done great work since our 2010 EU bailout in tightening the national purse strings and getting better value for taxpayers’ money. But is having inadequately paid, unsuitable staff in a critically important State agency a false economy?

Though it has been a bad day for the ODCE, it has had great successes, and deserves our support. Out of bad comes good. Lessons have to be learned from this debacle. We need a strong effective ODCE.

1 Are we really facing the death of the office?
2 Gardaí cannot prosecute people who breach midlands movement restrictions
3 10 upgrades that will add value to your home and 5 that probably won’t
4 New Zealand marks 100 days without a case of coronavirus
5 Covid-19: One more death and 174 further cases confirmed in State
Real news has value SUBSCRIBE