Domestic suffering simmers beneath the surface of domestic goddesses 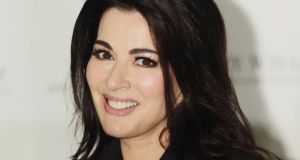 Nigella Lawson – “It is hard to imagine such a confident and commanding woman as the victim of abuse of any kind.” Photograph: Yui Mok/PA Wire

You know, Isabella Beeton’s husband very probably gave her syphilis. The path of the domestic goddess has never been smooth. The news of Nigella Lawson’s less-than idyllic – indeed pretty worrying – domestic circumstances is upsetting. But our purveyors of domestic bliss have always emerged from tragedy and scandal. That has never stopped us imagining them living in some sort of domestic nirvana. It is time to get over our surprise.

For those of us who have interviewed Lawson it is hard to imagine such a confident and commanding woman as the victim of abuse of any kind. (It was 1999. How To Eat had just been published. Lawson was in Dublin on the book tour, wearing beige cashmere, and never have you seen so many men queueing to have a cookery book signed). Yet, confronted last week by the photographs of her husband manhandling her outside a London restaurant, imagine it we must.

There’s a bigger issue here though, about how these paragons of domestic bliss frequently emerge from domestic suffering of the nastiest kind, often endured in childhood. Beeton’s widowed mother remarried, and she was eventually the eldest of a step-family so enormous even by Victorian standards – 21 children – that it lived in the grandstand at Epsom racecourse; her step-father being the steward there. Is it really any wonder that Beeton’s masterwork was called The Book Of Household Management?

Unhappy childhood
Lawson has made it pretty clear that her own childhood was an unhappy one, with a beautiful, depressed and apparently unstable mother whose cookery practices are often evoked in her daughter’s books, particularly in How To Eat.

Another modern cookery guru, Nigel Slater, lost his mother as a small boy, and was locked into some sort of sad emotional cook-off with his new step-mother, both vying to feed his father.

Those of us who have interviewed Slater found him an intense perfectionist who was frank about his years in therapy. The journalist Jan Moir has written perceptively about how the adult Slater is recreating the perfect home, over and over again. But, come to think of it, perhaps that’s what we’re all doing.

In Ireland our greatest cookery writer, before the Allens, who have had their own drama, was Maura Laverty. She had a life of unremitting tragedy, as well as of unremitting creativity: an unhappy childhood, a ghastly husband and two of her three children dying before she did. (Her surviving child, Barry, now deceased, was the source of this information.)

Laverty was the sole breadwinner for her children. Frequently she was not paid royalties for the plays she wrote for her friends, Hilton Edwards and Micheál Mac Liammóir, at the Gate Theatre, which often rescued that little company from financial disaster. She was a sophisticated, gracious woman who had to scramble for money all her life. No wonder, really, that her most famous cookery book was called Full & Plenty.

But we must return to Isabella Beeton (born 1836), that touchstone of Victorian respectability, and mother of the cookery book industry; she was the game-changer and the genius. Her work set out a model of domestic order and her life illustrated quite the opposite. This is the destiny of the domestic goddess. Look at Martha Stewart, cupcake maker and convict.

Unbeatable brand
Beeton’s Book of Household Management was published in 1861, when she was 26. She was dead at 28, one week after delivering her third child – he was the first of her children to survive. Beeton was an unbeatable brand, bossy and reassuring as all domestic goddesses have to be.

Her husband, a magazine publisher, had been her colleague and promoter. She seems to have been a highly organised, hard-working visionary. She was a journalist, like Lawson and Laverty. She wrote her book for women like herself, the new middle class, whose lives were intended to be both more genteel and more complicated than those of their mothers . They were facing new problems – like how to manage servants, for example, and how to entertain.

Beeton had a lot of advice to give. Her biographer, the historian Kathryn Thomas, established that she plagiarised a lot of the recipes she used. (There are shades here of Nigella-gate, when it was revealed that, as well as wafting round her house at night while wearing a polka dot dressing gown, as we saw on television, Lawson also employed a team of assistants to help her develop recipes. The media pretended to be shocked at this; Beeton would not have been surprised.)

In her book The Short Life and Long Times of Mrs Beeton, Kathryn Thomas reckons that her husband gave Beeton syphilis on their honeymoon. Although the disease did not have time to kill Beeton, who died so young, it is pretty certain it killed Samuel, at the age of 46.

The greatest cookery books are written by people whose lives are turbulent and troubled. No matter how much we might like to think otherwise it’s time to realise that domestic goddesses do not, on the whole, live with domestic gods.