Emmanuel Macron will offer no mercy to Theresa May 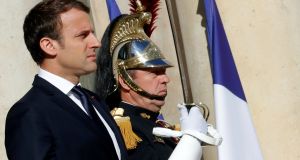 We now have strong and stable leadership - but in France, not Britain. Theresa May, Britain’s prime minister, will enter the Brexit negotiations gravely weakened after the UK general election. By contrast, Emmanuel Macron, France’s president, is poised to emerge from legislative elections with the huge parliamentary majority that Mrs May once dreamt of.

The two leaders will meet for dinner in Paris on Tuesday night. There are some fond hopes in the Remain camp in Britain that the combination of a weak May and a strong Macron may help to get Britain off the hook of a hard Brexit. But that is unlikely. The French president has little incentive to help the UK out of the mess it is in, even if that were possible. Indeed, for President Macron, Brexit is looking increasingly like a historic opportunity rather than a cause for regret.

Mr Macron’s programme for the revival of France has the EU at its heart. On the night of his election victory, the president took to the stage to the strains of the European anthem, “Ode to Joy”. But his vision of a revitalised France, inside a revitalised EU, actually works better if Brexit proceeds uninterrupted.

Mr Macron represents the wing in French politics that believes passionately in “more Europe”. He wants much deeper EU integration on defence and finance and has even argued for a eurozone finance minister.

Traditionally, Britain has acted as a brake on European federalism. An EU without Britain will be much more open to French ideas on economic integration, the protection of European markets and the establishment of an EU defence identity. But the window of opportunity for pressing forward with the federalist agenda might be relatively small. That is all the more reason for the Macron government not to allow the Brexit process to be spun out over many years.

A Brexit in which Britain is seen to suffer also serves a crucial domestic political purpose for Mr Macron. Marine Le Pen, his opponent in the presidential election, praised Brexit as an example for France.

Mr Macron needs to show French voters that leaving the EU will bring only pain. If, at the same time, he can rebuild the Franco-German partnership at the heart of the EU, he might be able to restore the popularity of the European project in France.

With Britain out of the EU, there is a much stronger chance of restarting the Franco-German motor that traditionally drove European integration. The Germans are much more receptive to French overtures in the light of Brexit and the Trump presidency in the US. In the same recent speech in which Angela Merkel suggested that the UK and the US were no longer reliable partners, the German chancellor lauded the need for co-operation with France. A recent opinion poll suggested that 94 per cent of Germans trusted France, compared with 60 per cent who trust Britain and just 21 per cent who trust the US.

The enlargement of the EU to take in the countries of the former Soviet bloc - a policy strongly supported by Britain - has diluted France’s traditional sway over the EU. But Poland and Hungary are also self-marginalising by adopting increasingly illiberal and anti-democratic policies at home.

Mr Macron had led the calls for the EU to take a very tough line with the Poles, up to and including the imposition of sanctions. With Britain out and the big eastern European countries pushed to the margins, the EU might begin to feel a little more like the original “Europe of Six” that French statesmen invented in the 1950s and which some French Europhiles are still nostalgic for.

The opportunities for France are economic as much as political. If Britain excludes itself from the EU single market, France has a unique chance to hoover up jobs in finance and manufacturing. For that reason, a “hard” Brexit might suit France better, since it would ensure that the City of London lost its “passport” to do euro-related business and would also disrupt supply chains for British manufacturers.

Airbus has already warned that jobs may leave Britain, if the UK leaves the EU’s internal market, and France could well be the beneficiary. All of this means that Mr Macron has little economic or political incentive to make concessions on migration or money, to make it easier for Britain to choose a “soft Brexit”.

As President Macron pursues French national interests in a hard-headed fashion, he will also have the delicious pleasure of occupying the moral high-ground, pointing out that Britain has brought its sorry fate upon itself, while he is motivated solely by a desire to protect the European project.

Mr Macron is undoubtedly an internationalist. But he is also a president of France and therefore heir to an ancient rivalry with Britain, documented by Robert and Isabelle Tombs (an Anglo-French academic couple), in their 2006 book, That Sweet Enemy . As the Tombs tell it, the histories of both France and Britain have been profoundly influenced by their “love-hate relationship”.

For the past 25 years, the British have felt smug about their position relative to a struggling France. Now, with Mr Macron secure, Mrs May wobbling and the Brexit negotiations and the Wimbledon tennis tournament starting soon, it is advantage France.