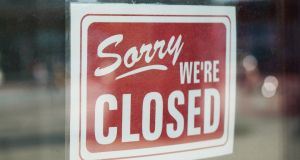 One of the more sobering revelations of the lockdown, for me, is that what the health services call “social distancing” is what, before now, I had considered normal life. Certainly, the adjustments have been minimal. I’ve always hated shopping, long before it was an official health risk. I’m at an age where nightclubs were already a distant memory. I’d lost the habit even of drinking in pubs, much. And whenever I go to cafés in recent years, it’s usually to read, alone.

What remains of my sporting career is also largely solitary. I’m a runner, albeit with a club, and of course there is a social element to that. But even on a running team, you run together, alone. As for physical contact, that’s entirely optional, apart from the defensive use of elbows.

Parenting is not as hands-on as it used to be either, I find. I was probably one of the first generation of Irish men, certainly in my ancestral line, to be intensely involved in the rearing of children. And very rewarding it was too.

But the kids have reached an age now when accepting hugs from their father is reserved for special occasions, usually in airports and sometimes discouraged even there. I miss the time when it was a nightly ritual before bed.

The fact remains, however, that I am descended from a long line of non-huggers and, as I enter late middle age, may be reverting to type.

There’s a cultural aspect to this too, I’m sure. One of the reasons advanced to explain the cruel toll coronavirus has taken on Italy and Spain is that the Mediterranean lifestyle is so much more physically sociable than ours.

But even in this country, there are differences from region to region.

You might recall that for several days earlier in the Covid-19 crisis, my native Monaghan was the only Irish county without a confirmed case. Hearing this on the news one night, I joked that we were “God’s chosen people”. Then my children’s other parent, who comes from a more Mediterranean part of Ireland, muttered something to the effect that we were “God’s frozen people, more like”.It stung a little, probably because it was true.

I was reminded again of a funeral from many years ago – I won’t say where exactly, except that it was in the Diocese of Clogher (which, by the way, is from the Irish for “stony place”) – where I was among late-comers standing outside the packed church, listening to the service on a speaker.

It was a particularly sad occasion, so when it came to the usual exchanging-the-sign-of-peace, the priest, who had spent years abroad, in warmer climates, thought something more than a handshake was required. He suggested instead that we each turn to our neighbour and “hold that person in your arms”.

How this was received inside the church, I’ll never know. But among the mostly-male gathering outside – all at least two metres apart, even then – it was greeted with silent horror.

For an eternal split second, nobody moved. I was about to to call on all my experience of living in Dublin, mixing among theatrical types, and embrace the burly man in a GAA jacket beside me.

Then, suddenly, everyone just shook hands as usual. The priest couldn’t see us, after all, so he was quietly overruled.

Anyway, for all these reasons, the two-metre social distancing comes naturally.  It’s the other anti-social circle, the two-km cordon beyond which we’re not supposed to travel without good reason, I find more a challenge.

The good news is that, with a six-mile-a-day running habit to support, I’m blessed that my circumference includes a big chunk of the Phoenix Park (all the more glorious now that most traffic is excluded). The bad news is that I’m beginning to hanker for the bright lights and euro-brick of the city centre.

On the other hand, I know of people for whom the lockdown’s big epiphany has been how much their lives were already confined to the immediate locality. And a 2km radius is surprisingly large when you see it on a map.

I was reminded of this by my daughter, who has been in Germany for several months but returned last week. She’s now back where she’d been staying beforehand, elsewhere in Dublin, and still in voluntary self-isolation, so that we haven’t seen her yet, except via iPhone. But it appears that the outer ripples of her 2km circle just about overlap with ours.  We look forward to meeting her again soon at the border crossing. I’m not sure yet about hugging protocols.

1 Taoiseach has confirmed schools will reopen at the end of August
2 We need to pay very close attention to what is happening in Britain now
3 Coronavirus: Further six deaths reported along with 39 new cases
4 The strain is starting to tell on Brendan O’Connor
5 Garda to scale down Covid-19 enforcement for June bank holiday
Real news has value SUBSCRIBE