Dick O’Riordan: A close encounter with Brendan Behan in the Press office

‘He led me like a reluctant puppy into the middle of the office floor and, with a swift jerk he had me in a headlock on the slippery floor’ 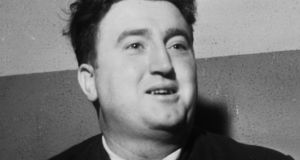 Brendan Behan uttered just a single expletive in relation to “the stone’’ and put his bottle of milk down on a ledge. Photograph: Eddie Kelly/ The Irish Times

I once had an up-close and personal altercation with Brendan Behan. The incident took the form of a quasi-wrestling match on the floor of the front office of the Irish Press, of cherished memory.

The circumstances leading to the incident were something like this. As part of my training I had been assigned to the features department “ at the top of the house’’ – that’s how staff always referred to the twisting warren of doors on the third floor.

The features editor, Arthur Hunter, a cheery and unfailingly courteous Clontarf gentleman who dressed impeccably in the twills, checks and brogues of a country squire, presided in a small enough main room, communicating through a haze of cigarette smoke (from within) and diesel fumes (from without). All of this came from the chronically sick buses at the terminus below, which belched up nauseous fumes all day long. Nobody seemed to mind, and the big Georgian window was always generously open to allow in “fresh air’’.

The inhabitants were a fascinating collection, even by Burgh Quay standards, and particularly to a young lad just recently promoted from copyboy to junior journalist. The legendary Ben Kiely would hold court on his weekly visit, his sonorous drone keeping everyone enthralled as he related tales of excursions through the highways and byways of pub-infested Ireland. Bobby Pike, the cartoonist whose caricatures still decorate the walls of fashionable Dublin pubs, would be slowly sketching his latest “victims’’ – as he called them – usually from crumpled pictures that had been in his pocket for a week. Irish editor Breandán Ó hEithir would invariably be looking for his cigarette somewhere, lit or unlit, while a “head-down” young Hugh O’Flaherty – later to become a Supreme Court judge – subbed copy, produced page layouts and talked printers through problems downstairs in the cranky caseroom.

So, as I was emerging from all this one dank autumn evening in the early 1960s, Arthur Hunter – always pronounced reverentially as “Author’’ by his friends – said to me “Richard, please go down to the front office and take some copy from Mr Brendan Behan and bring it up here”.

Just as I was about to shoot off downstairs, he called me back and said: “On second thoughts, Richard, under no circumstances allow Mr Behan up the stairs and into this office. He’s a troublesome fellow.’’

Sure enough, Brendan was waiting for me at the front desk with a wad of paper in one hand and an unopened bottle of full-cream milk in the other. He was impeccably dressed in a pristine white open-necked shirt and seemed in good humour, contrary to recent newspaper reports of him ranting and raving at the nearby Abbey Theatre because they wouldn’t put on his plays.

I told him who I was and he replied that he wanted to bring up the copy himself. I told him Mr Hunter was very busy at “the stone’’ with the printers and was unavailable – a little white lie. He uttered just a single expletive in relation to “the stone’’ and put his bottle of milk down on a surrounding ledge. He proferred me the copy three or four times, withdrawing it quickly as I tried to snatch it from his hand.

He was teasing me and chuckling at the fun of it – and just then opportunity knocked, or rather opened, for the quare fellow. A staff member coming into work released the inner security clasp on the desk’s half-door and, quick as a wink, Brendan was through the gap and grabbing hold of my sky-blue knitted-wool slim-jim tie with a fringe on the bottom – the sort the Beatles were wearing.

He led me like a reluctant puppy into the middle of the office floor and, with another swift jerk he had me in a headlock on the slippery floor. It happened so fast that the only thing I can recall with any certainty as I tried to wriggle my head from his armpit, was the fresh smell of his recently laundered shirt.

There was an immediate flurry of activity as Small-Ad customers rushed out of their cubicles to see what all the excitement was about. One old dear, who looked rather like Minnie Brennan from The Riordans, poked Brendan in the ribs continuously with her black brolly, ordering him to “let the boy up, you big bowsie’’.

Brendan held me there, face to face, smiling triumphantly. I felt shakey as I thought the editor Mr Walsh would be passing through soon. What would be say? However, after Brendan had his sufficiency of fun, he released me and we stood up together, him looking rather sheepish as he settled his billowing shirt and baggy pants. He then spotted his bottle of milk on the shelf and – probably for want of something better to do – took off the red cap and began drinking it slowly, like a deserved pint. He seemed rather lost as to what to do next, so he opened the big wooden front door, looked back sheepishly and shouted: “Would you like to go for a bag of chips?’’

Naturally, I said no, but now 50 years later, I’m not so sure. Instead of writing an article about Brendan Behan, I might have got a good book out of the whole thing.