Diarmaid Ferriter: How did Irish religious orders get so rich?

The orders have profited spectacularly at the expense of community welfare 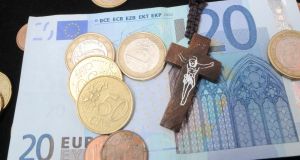 The founder of the Sisters of Charity said her resource was the “Bank of Divine Providence”. Photograph: iStock

Let me write in praise of the Catholic Archbishop of Dublin, Dr Diarmuid Martin. In overseeing the Dublin Diocesan Archive, he has ensured that its abundance of revealing documents are open to researchers of the social, religious and political history of Dublin in particular and the evolution of Catholicism in Ireland generally.

A new book by historian Lindsey Earner-Byrne, based on research in this archive is titled Letters of the Catholic Poor: Poverty in Independent Ireland, 1920-40. The book’s origin lies in seven large archival boxes containing more than 4,000 letters labelled “charity cases”, which were sent to Archbishop Dr Edward Byrne during the formative decades of the State. Earner-Byrne observes that these letters “have left one of the few traces in history of the experience of poverty . . . they offer insights into the reality of poverty and how it was perceived and negotiated by those who struggled permanently in its embrace or drifted in and out of its clutches”.

It is an important book not just because of its illumination of these lives – the letters describe “in highly personal ways the realities of living in appalling conditions, of having to beg” – but also because “the story of poverty is all too often told solely from the perspective of those who encountered the poor through charity or social work”. This is “history from below”, and it has much relevance to the origins of contemporary debates about the role of church and state in healthcare and welfare.

One of the intriguing questions raised by Earner-Byrne is whether or not the impoverished Dubliners writing the begging letters would have fared better under British rule. While new welfare measures introduced by the Fianna Fáil governments in the 1930s such as unemployment allowances and widows’ and orphans’ pensions mitigated some of the worst poverty, these payments were so small they were also just another part of the “economy of makeshifts”. Had those beseeching the archbishop lived under British rule, “they may have fared better with the emergence of an earlier and more comprehensive welfare state”, while there was no Irish equivalent to the National Health Service in Britain, of which we were reminded again this week with the unveiling of the cross-party blueprint for the future of the health services, suggesting €6 billion needs to be spent in the next decade to provide equal access to universal health care.

In Ireland the State abrogated much of its responsibility for welfare to the Catholic Church, with its wealth and extensive network of charitable and health endeavours. This generated enormous power for the church and great dependence on it. It is possible to praise the hard, compassionate work done by those in religious life in these areas while being repulsed by what this has ultimately resulted in. This week, although the Sisters of Charity announced the end of their role with St Vincent’s Healthcare group and that that they will have no ownership of or management role with the new National Maternity Hospital, there is still the troubling issue of a new private entity being gifted a huge amount of public money for a hospital that should belong only to the Irish people.

How did religious congregations generate such wealth in the first place? From donations, State aid and the fund-raising of many communities

This “new era” for the aged religious orders also witnesses them as land sellers on a massive scale. In my own area of Goatstown, the Sisters of Jesus and Mary, the founders of Our Lady’s Grove primary and secondary schools, have sold more than five acres of fields formerly used by the schools, for a reported €13 million, with the land zoned for housing. In doing so, they have decimated the capacity for both schools – and the secondary school is the only non-fee-paying secondary school for girls in the area – to expand or provide their students with adequate sports facilities and open space. The response of the Department of Education is that these transactions are solely “ a matter for the congregation itself”.

That might be the case legally, but it raises this question: how did religious congregations generate such wealth in the first place? From donations, State aid and the fund-raising of many communities. When the founder of the Sisters of Charity, Mother Mary Aikenhead, established the original St Vincent’s Hospital in 1834, she responded to concerns about not having secured a regular source of funds for its maintenance by saying her resource was the “Bank of Divine Providence”.

The reality, however, was that Aikenhead was gifted huge amounts of money and successfully appealed for public subscriptions by urging “many good Samaritans” to help. A century later, thousands of impoverished Dubliners wrote to beg the church for assistance because it was their only option. Almost a century later, the wealth and power of the Catholic Church are still apparent, as is the abject failure of the State to confront the resultant inequality and the irony of the religious orders profiting spectacularly at the expense of community welfare.

1 We need to reverse our thinking on lockdown
2 Covid-19: Taoiseach warns ‘bumpy roads ahead’ as 859 cases and four deaths reported
3 Seán O’Brien: Anger over my parents’ break-up never left me
4 Two hundred Irish retailers for all your online Christmas shopping
5 Why Waterford is ‘the best Covid county in Ireland’
Real news has value SUBSCRIBE