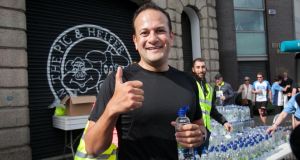 Simon Coveney would, I imagine, have been quite happy to throw Leo Varadkar in a vat of avocado mash last Sunday. Coveney reminded us that, for all the youthful vigour of lithe Varadkar and his running cubs, he too is well capable of running a 5km before breakfast. That, of course, would be a healthy breakfast.

All this running around by baby Blueshirts and their dietary virtue makes me mildly nauseous as does their related penchant for self-worship; not only the determination to make their young bodies temples of purity but their insistence that we watch them at it. They might occasionally invoke the iconic Michael Collins in telling us that the country is at a crossroads, but Collins had given up all that fitness malarkey at an early stage.

In late 1920, at the height of the War of Independence, he had started to sag. A British intelligence report suggested he “must have been a powerful man a few years ago; now heavy in movement and greatly out of condition. Coarse, pale face with heavy jowl . . . except for the eyes he is now quite unlike earlier photographs. Looks about 40.” And the poor divil was barely 30.

I wonder do any of these youthful politicos really talk to each other? How would they find the time, with all the pounding of pavements, mobile-phone and screen addiction, tweets and never-ending selfies?

When interviewed on RTÉ last weekend, Maurice Manning, former Fine Gael TD and bosom buddy of Enda Kenny, pointed out that they spent a lot of time in the Dáil bar in the 1980s actually talking to each other and those on the other side of the political divide. Today’s younger TDs cannot possibly have time to do that with any real depth. If they devoted as much time to philosophical reflection as they do to self-presentation there might be more grounds for optimism.

Do they ever have a chat over a full Irish breakfast after a rake of pints? Or eat biscuits instead of avocados? In his book The Price of Power, Pat Leahy recounts the details of the negotiations that led to Fine Gael and Labour agreeing a coalition programme for government after the 2011 election. Fine Gael’s Michael Noonan was enjoying himself immensely but Joan Burton of the Labour Party was worried: “She thought Michael Noonan shouldn’t be eating so many biscuits. She had an idea he might be diabetic and half-seriously wondered, what if he keels over?”

But biscuits were much better fuel for government formation than avocados would be, and it is said that when the Green Party was dealing with Fianna Fáil, some of the less well behaved Fianna Fáilers deliberately stuffed themselves with rashers and sausages in front of them to remind them that political senior hurlers don’t do muesli.

Of course, the days of smoke-filled rooms have come to an end but there was a lot of good thought in those rooms. Donogh O’Malley was cut down in his prime as a ground-breaking minister for education half a century ago because of his overindulgence but the stimulants he consumed were at least conducive to big ideas. O’Malley’s main concession to fitness, his biographer P J Browne has noted, was to smoke “60 to 80 Peter Stuyvesant a day, thinking they were less harmful than the Gold Flake”.

Kenny has to take some of the responsibility for the Duracell-bunny Blueshirts due to his own insistence on wearing cycling shorts and pedalling at a fair pace around the Ring of Kerry or from Mulranny to Achill, but at least that came at a later stage in life, following the years of indulgence in pints and nightclubs.

Judging by the account of Miriam Lord, Pascal Donohoe was on his best behaviour last weekend, joining Varadkar for breakfast and having avocado mash and roasted cherry tomatoes, but that is just because he is determined to be Minister for Finance. I bet he skips that kind of fare normally, and that he will not photograph himself doing a workout or arrange to be photographed in gym gear as he arrives to public-sector pay talks. Donohoe also reads a lot more books than the rest of them; where would the others find the time or inclination when there is self-promotion to be spun?

Varadkar’s squeaky-clean team might be in for a shock in the future, however. All this running is not good for long-term health or appearance. I’ve done too much of it myself (strictly off camera) and it takes its toll. I now look so wrecked that my father is frequently mistaken for my brother and my dreams of being taoiseach in this new era of political fitness are over.