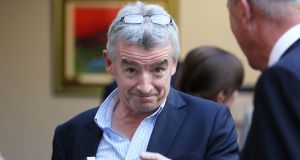 ‘O’Leary revelled in a coarse, hectoring and hate-filled discourse that would make Donald Trump proud – and his primary targets were public servants.’ Photograph: Nick Bradshaw

Perhaps the main reason why Ryanair chief executive Michael O’Leary spoke to a Fine Gael “business breakfast” last week – a private fundraising event for the party – was because he wants backing for Ryanair to provide a third terminal at Dublin Airport and no involvement of the State-owned Dublin Airport Authority. But he said a lot more at that breakfast, organised by a south Dublin branch of Fine Gael in the Shelbourne Hotel.

O’Leary revelled in a coarse, hectoring and hate-filled discourse that would make Donald Trump proud, and his primary targets were public servants; those, who according to Minister for Finance Michael Noonan in December 2013 as Ireland prepared to exit the bailout, are among “the real heroes and heroines” of Ireland’s austerity programme and who endured, in his words, “serious pay cuts”.

Why do Noonan and his colleagues then provide a platform for O’Leary to eviscerate those same public servants, and not only that, but positively encourage it? Why is Fine Gael so keen to fawn over O’Leary? Noonan is reported as having introduced O’Leary as “Ireland’s leading altogether decent man”. Minister for Foreign Affairs Charles Flanagan publicly, via his Twitter account, expressed his delight at soaking up O’Leary’s rants: “great start today listening to Michael O’Leary sound off in flying form”.

O’Leary enjoys calling himself an “obnoxious little bollocks”, but the main Government party encouraging him is a more troubling issue. Fine Gael, according to itself, is a “party of the progressive centre”. Speaking at the unveiling of the budget on Tuesday, Minister for Public Expenditure and Reform Paschal Donohoe solemnly announced: “Those of us in the middle ground of politics have a duty to show that co-operation and consensus can work; to show that our tone can be moderate.”

In relation to its fundraising, the party asserts: “All monies fundraised will be used for electoral purposes and referenda campaigns as no statutory funds are permitted to be used for these purposes.” So the money raised by O’Leary’s attacks on public servants and his aggressive privatisation agenda is to assist the electoral fortunes of Fine Gael. Why is Fine Gael so comfortable with this? Is it because, in reality, it sees O’Leary as an ideological soulmate; a perfect fit for a party that talks centre but thinks right?

By all accounts, the several Ministers present at the braggarts’ breakfast did not shift uncomfortably at RTÉ being described as a “rat-infested North Korean union shop” and the singling out of an individual RTÉ journalist for abuse; or with the demand that gardaí campaigning for pay restoration be sacked, or with the insistence that the health and transport services should be entirely privatised, or with the contention that Dublin city centre has been destroyed through “nonsensical pandering to bloody cyclists”.

All very juvenile and best to be shrugged off, it could be argued, as O’Leary likes being an Irish Trump and savours the attendant publicity, but why should Fine Gael go unchallenged in contributing to and endorsing a destructive pitching of public against private sector which has been a hallmark of reaction to the Irish economic crisis of recent years?

O’Leary knows nothing about public service. Born to the silver spoon, he was a Clongowes Wood College boy and a student at Trinity College Dublin where he lived in a family-owned apartment before he began his private business enterprises. O’Leary was a poor financial adviser to Ryanair founder Tony Ryan, advising him to close the airline, or else sell it to Aer Lingus.

But where would O’Leary be without State support and public money? Ryan sought political backing to withstand Aer Lingus’s predatory pricing and Charles Haughey obliged, with Ryanair getting a free run at Stansted Airport through a demarcation of the routes between the two airlines. Ryan also secured State subsidies in return for serving provincial airports and in 1992, rent breaks for Ryanair’s headquarters at Dublin Airport.

Another part of the Ryanair history not dwelt on by its champions is how the State-owned Aer Rianta contributed to the saving of the airline in its early days by writing off more than £1 million (€0.9 milliom) in landing charges and other fees and the renegotiating of deals at Cork and Shannon. These layers to the Ryanair story are now banished in favour of the macho O’Leary soundbites, such as “there is no principle that can’t be overturned for competitive reasons”. Likewise, it appears there are no depths to which the unprincipled O’Leary will not reach to excoriate public servants.

Long ago he coined his own expletive – “bolloxology” – which, he explained, “should be liberally used in one-to-one print media interviews when referring to any procedure that other airlines claim is complex”. In juvenile, privileged and elite O’Leary-land there are no complexities; it is all a simple matter of money, market dominance and pathetic public servants that Fine Gael seems happy to laugh at too.