Dialogue between reason and religion an antidote to populism

Rite&Reason: Project on religion and peacebuilding initiated at Maynooth 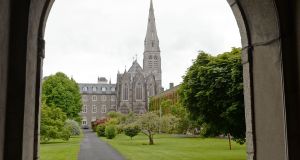 NUI Maynooth: The Edward M Kennedy Institute is leading a research project on religion and peacebuilding within the framework of the Organisation for Security and Co-operation in Europe. Photograph: Eric Luke

A consensus on European values and a wholesome confidence in the future of Europe are further away now than 15 years ago. A similar psychological slippage has occurred at the global level.

Richard Haass of the US Council on Foreign Relations puts it like this: “There are fundamental trends afoot that, all things being equal, work against order.”

In Laudato Si’, Pope Francis states that “doomsday predictions can no longer be met with irony or disdain”. Risk factors include global environmental degradation and the development of new aggressive capabilities, including cyber capabilities, for which we have no “rules of the road”.

The world needs new insights that will engage us at the level of our conscientious convictions and reveal the connections between one issue and another.

The Edward M Kennedy Institute at NUI Maynooth, supported by St Patrick’s College, Maynooth, is making a contribution by leading a research project on religion and peacebuilding within the framework of the Organisation for Security and Co-operation in Europe (OSCE).

Our focus is on societal norms and social cohesion. We are fortunate to have as executive director Peter Cassells, one of the pioneers of social partnership in our own country. At a workshop last week, a group of scholars laid out a programme of future work with the help of practitioners from OSCE, the EU and UN structures.

In receiving and integrating migrants, the commitment of religious actors to social justice makes all the difference

The premise of our inquiry is that public service, entrepreneurship, our willingness to obey the law, our capacity to reform the law, and mutual trust at home and abroad – all are influenced by our character and our understanding of the world.

According to opinion polling (Pew), more than 80 per cent of the world’s population identify themselves as having a religious belief.

Religion plays a role, either positive or negative, in Northern Ireland under Brexit, the dangerous conflicts in the Middle East, India between secularism and Hindutva, the pursuit of peace on the Korean peninsula, debates in Europe about migrants, and the competition for votes in the US.

In the sphere of multilateral diplomacy, there is now a trend towards making the religious factor more transparent and comprehensible. Managing the interaction of a secular state with the religious confessions has many different aspects, and we need to identify promising practices from around the world.

In receiving and integrating migrants, the commitment of religious actors to social justice makes all the difference; governments need to partner with the religious confessions in providing public goods.

Concepts, having some of their roots in a religious understanding of the world, can help uncover new sources of political energy and consensus – concepts such as the unity of the human family, reverence for nature and for life, Mahatma Gandi’s civil resistance or satyagraha, freedom of conscience, fraternity and friendship, trust, hope and reconciliation.

When I was Irish ambassador to Uzbekistan, my wife and I visited the synagogue in Bukhara. In the 19th century, Bukhara was home to a school of Islam that contributed significantly to social cohesion and inter-religious understanding in Central Asia and Russia.

There is scope for a paradigm change globally and at the regional level, starting from the reality that markets need a political context and a culture of trust that they themselves are incapable of producing

A respectful dialogue between reason and religion is an antidote to populism and fundamentalism.

Is there a lesson here for Europe? President Emmanuel Macron, in a speech on April 9th at the Collège des Bernardins, asks the religious confessions to bring “to the service of the republic” their wisdom, their commitment, and their freedom to speak out; in the background is the important article in the EU treaties (article 17, TEU) on dialogue with the religious confessions.

The EU’s Fundamental Rights Agency is developing a “shared space” for human rights activists and religious actors. Secretary-general António Manuel de Oliveira Guterres, in July 2017, launched a Plan of Action for Religious Leaders and Actors, which highlights their role in “building peaceful, inclusive, and just societies”.

The African Union is establishing an innovative interfaith dialogue forum in support of its peacebuilding efforts. A number of new religion-based initiatives encourage businesses to define more clearly a purpose beyond profitability.

There is scope for a paradigm change globally and at the regional level, starting from the reality that markets need a political context and a culture of trust that they themselves are incapable of producing.

Painstaking committee work on the immediate issues is indispensable and must continue in Brussels, Vienna and elsewhere.

But to reason together, advancing the dialogue on values, Europe – the wider Europe – needs a parallel forum, open to other stakeholders, with a broader agenda, and operating to a slower rhythm: our client is not in a hurry.

Philip McDonagh has served as Ireland’s ambassador in several postings. Currently he is adjunct faculty at the Edward M Kennedy Institute for Conflict Intervention, Maynooth, and Distinguished Global Fellow at the Centre of Theological Inquiry, Princeton, in the US.

On Thursday, April 26th, at 7.15pm he will speak at St Mary’s Church, Haddington Road in Dublin on Pope Francis and Religion in the Public Sphere