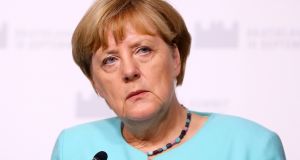 Last October, a 26-year-old fireman helped put out a fire at an asylum home in the western city of Hagen. A week ago he was sentenced to six years in prison for setting the fire.

The man started the blaze, he told the court, because he was “afraid of break-ins, violent acts against my granny, girlfriend and sister”.

His was just one of a record 163 violent attacks on asylum homes in Germany in 2015, a year when one million people filed for asylum. That depressing record was shattered again by June of this year, even as asylum applications have dropped off.

From east to west, the atmosphere is darkening in Germany: towards migrants and towards the woman many here see as Mrs Migration Crisis: the chancellor, Angela Merkel.

Two weeks ago, in a regional poll, her Christian Democratic Union (CDU) finished in third place, for the first time behind the far-right Alternative für Deutschland (AfD). Yesterday the CDU was hammered again in Berlin’s city-state elections. Unusually for Germany, these state elections hinged on an issue that is both local and national: the migration crisis.

After 11 Teflon-coated years in power, a chastened Chancellor Merkel headed to the EU summit in Bratislava last week with her party down almost 10 points on its last election outing in 2013.

A year ahead of next year’s federal election, with further regional polls looming, the slump can be tracked back to Dr Merkel’s fateful decision of September 4th, 2015, when she set aside EU asylum rules for 20,000 Syrian asylum seekers who had set out on foot from Budapest to Austria and Germany.

Fearing terrible scenes if she sealed Germany’s borders, it was a leap of faith for Merkel, radically out of character for a politician who has patented a unique brand of pedantic pragmatism.

A year on, though, Germans are still arguing over whether it was the sensible thing to do or whether it catalysed an already biblical wave of migration.

Today, September 4th, 2015, occupies a similar place in Germany’s political annals as the fateful night of the bank guarantee does in Ireland.

Was the chancellor’s lone decision an outpouring of humanity towards Syrians stuck in Hungary, Germans ask, or a display of narcissistic naiveté?

Did German volunteers give exhausted arrivals a hearty welcome, many wonder now, because they were anxious to finally do something for the poor people of war-torn Syria? Or were they, subconsciously, trying to convince their European neighbours – and themselves – that they were not the heartless monsters portrayed in the euro crisis?

Many questions, few answers, and a palpably conflicted nation. Numbers have slowed now, but still about 300,000 people have filed for asylum in Germany alone this year. But the welcome has cooled rapidly, thanks to some asylum seekers being involved in the New Year’s Eve sexual assaults on women in Cologne and a series of violent attacks over the summer in Bavaria.

In every speech, Merkel warns against linking Islamist violence directly to the refugee crisis. But as German special forces exposed an Islamic State sleeper cell last week, many voters are making precisely that link and drifting to the far-right, anti-immigration AfD.

The AfD is pulling in aggrieved voters from all quarters who believe that Merkel personally threw open Germany’s doors to an uncontrolled migration wave of both asylum seekers and economic migrants – but without asking them.

In the media, a related narrative has taken root: that Germany’s refugee policy – like much of government policy in Berlin these days – is less about the national interest than about Merkel’s tactics.

But if Merkel must go, who would replace her? It’s a very short shortlist: interior minister Thomas de Maizière, defence minister Ursula von der Leyen and Jens Spahn, the ambitious 36-year-old deputy finance minister. All think highly of themselves, but none have dared to go out on a limb, and risk their careers, by challenging Merkel and signalling that they possess the killer instinct required for regicide.

Quite the opposite: after 11 years of riding on Merkel’s coat-tails, the CDU is on its way to becoming what, a year ago, Spahn described as a torso-less party: a political ship with a strong figurehead – Angela Merkel – and little else.

It speaks volumes about the state of the CDU that the figure mentioned most often now as a Merkel successor is Wolfgang Schäuble. But the finance minister has been an MP for 44 years and would, at 75 next year, be two years older than West Germany’s first post-war leader, Konrad Adenauer.

As the “Merkel must go” calls grow louder, and the risk of a destabilising Islamist attack remains high, it’s worth remembering two things: first, in its DNA, the CDU is not a putsch party; and second, the last person man enough to stage a putsch, in 2000, was a woman, Angela Merkel.