Denis Bradley: Loss of a majority will have a deep impact on unionism

Issues of identity, sovereignty are the same as 100 years ago but soil they’re in has changed radically 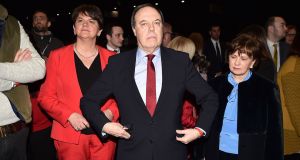 The old republican mantra that England must withdraw from Ireland should be updated. It needs replaced with one that calls upon Ireland to withdraw from England. Withdraw from the obsession that we have been sucked into since the Brexit referendum.

England has done what England had to do. The three years, the torturous years since the Brexit referendum, followed by two general elections have revealed that England has a deep psychological need to find its freedom and its independence from the EU. The confirmation of that has come slowly over the last three years but it has been copper fastened by Thursday’s election.

From this side of the Irish Sea, the decision that England has made (not Scotland), may seem irrational, narcissistic and immature but even if the choice they have made is all those things and more, it is theirs to have, theirs to live with, theirs to celebrate or regret in the future.

The election has confirmed that England is divided; elated and depressed in near equal measure. The country faces a long period of negotiation about its relationship and its trade with the EU, including Ireland. It will have to reengage with the SNP in Scotland in deciding future relationships; with an SNP who, in relative terms, had an election result that is even more impressive than what the Conservatives had. A second independence referendum for Scotland is firmly back on the political syllabus.

The new government and especially Boris Johnson will have to tread carefully with the unionist community in Northern Ireland, who are psychologically coming to terms (once again) with the reality that England had no difficulty in betraying them.

This country’s obsession with how Britain is dealing with Brexit needs to be replaced with a concentration of how Ireland (north and south) is going to address the consequences of Brexit and a Conservative Party with a greater majority than even they expected.

Trade and commerce, as is its wont, will find the mechanisms and muster the energy to have a presence and a voice in the continuing negotiations between Britain and the EU. The more difficult question is who will lead and who will contribute to the conversations about the future relationships within the North and between the North and the rest of the island? That will be a major piece of work for the present and future Irish governments.

Brexit has propelled us back to the future. The fundamental issues that were present almost a hundred years ago when Ireland fractured into six and twenty- six counties are again seeking attention and resolution. Those fundamentals of identity and sovereignty are the same but the soil that they are embedded in has changed radically.

Apart from a rump of dissidents, Irish militant republicanism has renounced violence and has morphed into politics. Loyalist paramilitary organisations are deeply disillusioned by Boris Johnson and what they see as his betrayal of the union. Some are angry enough to strike out at something but there is enough sense and experience within their ranks to keep a lid on it. Most of them also know they would be striking out at ghosts and the older heads know that they have been marched up to the top of the hill on too many occasions only to be walked down again. The anger and the threat of violence will further dissipate if the Assembly and Executive are re-established in the coming weeks.

Ironically, the two big parties, DUP and Sinn Féin are united in their hunger to get the Executive and Stormont back up and running. Both have had their egos battered and scratched by three years of wandering in a northern political wilderness. They had been feeling the icy winds of disapproval from their supporters over many months, but they were scourged when they knocked on doors seeking votes in the election. The irritation at the lack of an Executive increased when the election coalesced with strike action by nurses and health staff who object that they are not on pay parity with their counterparts in England, Scotland and Wales - as a result of a decision made by local politicians a few years back and that cannot be reversed without the reappointment of a local politician as minister of health.

Both parties had been willing, even hungry, to get the devolved government up and running again. The reduction in both their votes of more than five percentage points will add to that hunger. The resurgence of the SDLP and the increasing Alliance vote will keep them hungry.

But underlying all the statistics is the deep psychological impact on unionism. Unionism has lost its majority. The place it could always retreat to in moments of doubt or insecurity is no longer available to them. The defeat of Nigel Dodds is what will grab the headlines, but it is the progressive change in the overall demographic that will dominate the future.

But the future is not yet. The talks that will begin next week between the two governments and the local political parties will be fascinating to observe. It is more than likely that the cultural and moral disagreements that have kept the doors of Stormont shut will fade into the background.

Both governments (especially the British government) will be challenged to provide more money for a few major infrastructural projects to accompany the demand for an uplift in the block grant. The irony is that their chances of getting a financial uplift will be good. Boris Johnson will be anxious to keep the North quiet, at least for a time, as he faces into a plethora of complex issues.

1 Murdered and mutilated: Keane Mulready-Woods and the teenagers of gangland
2 Cork student fatally stabbed in the neck at house party named
3 Patrick Freyne: The mystery of Dermot Bannon and his many surrogate wives
4 Who was murdered teenager Keane Mulready-Woods?
5 Leaving Cert marks are altered as part of ‘unwritten policy’, claim examiners
Real news has value SUBSCRIBE