Debate about a second term for Higgins must start now 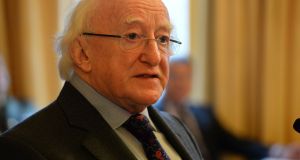 Given his repeated refusal to state that there will be no second term, it is reasonable to conclude that Higgins is at least considering putting his name forward for a further seven years. Photograph: Dara Mac Donaill/The Irish Times

Last week, Fine Gael’s Leo Varadkar, suggested Michael D Higgins would have “enormous” and, crucially, “cross-party” support should he seek a second term as president. He was flying a kite for Higgins to be given a clear run, even if Varadkar acknowledged it was “a matter for others” – meaning Fianna Fáil – to decide whether they would run a candidate of their own.

The President has been consistently coy on a second term, declining to either rule it in or, since being elected, out. Given his repeated refusal to state that there will be no second term, it is reasonable to conclude Higgins is at least considering putting his name forward for a further seven years.

The discussion of what a second term would be like needs to take place now – not in two years’ time – when the electorate could be presented with an effective fait accompli if the political class stands together in cross-party unity to deny the public a vote for the State’s highest office and return the incumbent to complete a 14-year stretch, at the end of which, incidentally, Higgins would be 84.

The key issue, however, is not the President’s age, but the increasingly political, even ideological, content of his public pronouncements.

In his most recent interview in The Irish Times (May 21st), Higgins criticised the Government, which at that point had been in power for less than a fortnight, for its failure to address the reform of direct provision for asylum-seekers in its programme for government. He went on to call for a programme of constructing State-owned public housing to solve the homelessness and housing crisis.

These are clear interventions in two specific policy issues. As such, they mark a significant stepping up of the political statements of a President who has repeatedly, throughout his tenure, made clear his ideological rejection of free-market economic theory in favour of an explicitly Keynesian model of the role of the State and an essentially social-democratic vision of how societies and economies should be run.

It is, of course, hardly surprising, given Higgins’s history and background as a passionate campaigner for his definition of “social justice”, that since entering the Áras he has continued to display the left-wing activist instincts (and deeply held convictions) that have fired his entire political life.

The point here is not whether Higgins’s policy positions – for that is what they are – and ideological pronouncements are either “right” or “wrong”, but that in expressing his own personal views, particularly in areas where there clearly is no policy consensus, he goes against the constitutional convention that has been in existence since the foundation of the State.

It is also worth noting that Higgins’s social-democratic vision for Irish society, in which an interventionist State acts as an agent of “social justice”, is rooted firmly in the Labour Party from which Higgins emerged as its candidate to capture the presidency – the same Labour Party that was overwhelmingly rejected by voters in the recent general election.

There is no left-wing consensus, Higgins’s views are his own.

While the functions of Uachtarán na hÉireann are clearly laid out in the Constitution, the office is also subject to the established convention that as head of state for all of the people, the President, whatever their party-political origin, must not become embroiled in controversies which may be deemed politically partisan or ideological. From day one, Higgins’s style has been markedly different, as he struggles to break free of the straitjacket of constitutional convention and stretch the boundaries of what is deemed acceptable public comment.

Furthermore, the recent “outrage against women” comment of Sabina Higgins in relation to an amendment in the Constitution which her husband is sworn to uphold have further politicised this presidency. Those who have defended her right to voice her opinions on a constitutional amendment as an alleged “private citizen” – who just happens to be married to the President and living in a mansion in the Phoenix Park at the taxpayers’ expense – would do well to ask themselves if they would have been quite so indulgent had she described abortion as an “outrage” and called for the retention of the Eighth Amendment.

If a President who has so far kept open the option of going back to the voters to seek a mandate for a second term – or who may yet accept the backing of the political class to forgo an election altogether – is unable or unwilling in his first term to rein in his desire to speak out publicly on politically contentious issues, how much more vocal and outspoken can we expect him to become in a second term when, with no possibility of a third, Higgins will no longer be constrained by the need to keep voters and politicians onside?

If Higgins is returned without a contest, the country will be facing into seven years of a president with no mandate from the voters and using the Áras as an activist platform for his own personal political views.If he decides he wants a second term, there needs to be a contest, not a carve-up by the political elite.