David McWilliams: If you want to work smarter, quit your smartphone

Without the distractions of the ‘attention economy’, I can focus and be more creative 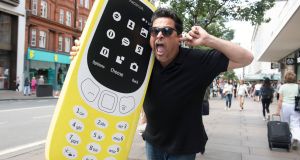 Despite my teenage children accusing me of looking like a small-time drug dealer, life with my new, old-looking Nokia has been one of serene calm.

It’s a month since I binned my incessantly needy smartphone on January 1st. It is much less difficult than I imagined and the result has been a revelation. Try it and your days will seem longer, books are more appealing, you’ll be far less distracted, more patient and less irritable.

An unexpected aspect of being free of the smartphone is that other people’s small talk is more interesting. Because you don’t know what’s going on in the world on a minute-by-minute basis, you are constantly surprised by the chat of people that you bump into and even old friends.

When a person excitedly enquires, “Did you hear what yer man said today on Twitter?” you are all ears because you have no idea what Donald Trump tweeted a minute ago about “shitholes” or immigrants or the American Dream. You don’t know because the little thing in your pocket hasn’t beeped to update you on the latest presidential outrage.

Quickly, you realise that you don’t care what Trump tweeted this morning, that you’re not fazed by the latest twist in the Brexit saga, that your life is not enhanced by knowing that Taylor Swift Croke Park tickets sold out or that Manchester City spent £100 million on some French teenage soccer sensation.

Your mind is cleared of lots of clutter.

Daily life without constant emails, Twitter feeds, Facebook updates and Instagram photos is a blessed relief. It feels like you are back in control of your own time and not constantly being tugged by some inanimate force at all times of day and night.

Giving up the smartphone is not for everyone, and there are obviously degrees of addiction. Maybe it’s an age thing, but for someone who led most of his adult life without being compulsively interrupted by an algorithm, it has been surprisingly easy to step back in time.

For the generation described as “digital natives”, it may be more difficult, but for those of us who remember exactly where they were when Dave O’Leary sent the Romanian keeper the wrong way, binning the latest device is no big deal.

I’m not on a total detox: I check emails, Twitter and Facebook on my laptop once or twice a day, usually late in the evening, but not being available to everyone all the time is beginning to feel like freedom.

And I’m not evangelical about it. Last week I was travelling and wanted to be on WhatsApp rather than paying extortionate fees to phone companies, so I swapped phones but made sure to delete all social media and Gmail apps from my smartphone.

Like others, I have given up the smartphone in order to work smarter. It’s a device that has made me not smart but less focused, less productive and less creative.

And, as I work for myself, the expression “time is money” is relentlessly true. If I am giving my time to my smartphone, where’s the money going? To some lad in Silicon Valley whose networks are made more valuable by my time, yet I’m doing all the giving, and he and his shareholders are doing all the taking.

Once we appreciate that everything that is creatively interesting or good is difficult and rarely comes easily, then we understand the need for focus, hard work and application. Focus tends to come from clearing our minds of distractions and applying our brains uninterrupted to finding out something new, fixing something or making connections we never saw before.

Therefore, we all need to use our time wisely, delineating unforgivingly between the frivolous and the necessary.

This brings me to the more general issue of “attention economy” itself and its unpleasant brother the “distracted economy”.

Historically, the economy has operated in great wealth-creating cycles or ages. The first great age was the agricultural age, when land was the source of wealth. This bred feudalism, the landed gentry and peasantry.

Next came the industrial age, when the main source of wealth was industrial capital, breeding the great worker-versus-capitalist divisions of the 19th and 20th centuries.

Then came the “knowledge economy” of the late 20th century, where ownership of knowledge or know-how (and locking it in via significant scientific investment and patent protection) generated vast wealth.

Now we are in what is termed the “sharing economy”, where knowledge is disseminated and the network – not the stored knowledge – becomes crucial. Once you have the network, you can sell to it and bypass traditional market structure. This is the Amazon, Google, Facebook and Twitter business model – a global process of eliminating the middleman, who used to mediate and take a cut between buyers/customers and sellers/producers.

We are all vulnerable to the attention economy and its main transmission mechanism, the smartphone. By having our smartphone always on, we give this economy permission to operate.

The flip side of the “attention economy” is the “distracted economy”. Once we allow our attention to be grabbed, we allow ourselves to be distracted. And once we are distracted, we can’t focus or deliver excellent work in an economy that demands quality – whether we are working inside a competitive company or on your own in the market.

This is the crux of the smartphone dilemma, and it’s not hard to see that the smartphone, by driving us to distraction, could easily end up being the dumbphone.

1 Trump turns to bible for photo op as DC burns around him
2 Covid-19: Easing of restrictions ‘unlikely’ to be speeded-up
3 Normal People: Full-frontal nudity was not its most radical feature
4 The subtle signs that point the way towards haemochromatosis
5 Should my mam wait for house prices to drop before buying?
Real news has value SUBSCRIBE