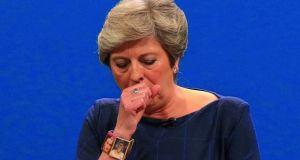 Sir, – Kathy Sheridan looks askance at the ignorance of the British public on the necessity for EU border controls to enforce the tariffs of a customs union (Opinion & Analysis, November 29th).

But what proportion of the Irish public realise that tariffs are a tax on consumers to protect featherbedded producers? – Yours, etc,

Sir, – May I humbly submit a new word to our lexicon? “Tan-splaining”, the constant condescending tone and general lack of knowledge of Brexiteers and commentators in Britain about Ireland. – Yours, etc,

Sir, – When you realise your friend is not actually waving goodbye but drowning you will do anything to help. The United Kingdom government has created an impossible problem by deciding to leave the European Union and the common trade area. It would probably draw the EU border in the Irish Sea but the Democratic Unionist Party would collapse the Westminster government. It cannot create an “invisible” border on the island of Ireland because the EU will not allow it. Ireland, whose strategic and political interests are threatened, will veto any “hard border”. There is no clear avenue of escape. Except one.

The only solution is for Labour and the Conservatives to jointly sponsor a UK-wide referendum changing Northern Ireland’s special status within the United Kingdom (which it already has under the Belfast Agreement) to allow it remain in the customs union. If voters say Yes, problem solved for Britain. If they say No, Ireland exercises its veto. The issue would have been properly debated, and the British government would have the authority to proceed. – Yours, etc,

1 Donald Trump is in trouble, and that could spell very bad news
2 Varadkar says Government pushing for quicker easing of lockdown
3 Taoiseach says €350 pandemic payment to be cut for some part-time workers
4 O’Doherty and Waters ordered to pay legal costs of case against State over Covid-19 laws
5 August the right time for primary schools to reopen
Real news has value SUBSCRIBE