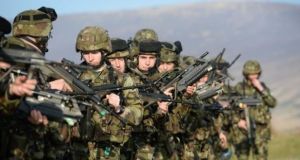 This is not the case. Ireland’s defence spending has fallen from over $1.147 billion in 2007 to under $993 million in 2016, according to Stockholm International Peace Research Institute.

This has seen the Defence Forces under pressure to maintain numbers across the forces to ensure the security and operability of our forces within Ireland and their missions abroad.

Compare that to Sweden, another neutral nation, which spent over $5 billion on defence in 2016.

Ireland must continue to invest in the Defence Forces to ensure our security as an island. Brexit poses a number of security questions for Ireland and therefore increasing security co-operation with our EU partners for defence will not harm our neutrality.

Ireland has a high reputation across the world for its peacekeeping missions under the UN and EU commands and that is the reasoning behind Ireland joining Nato’s Partnership for Peace in 1999 and the reasoning behind joining the Permanent Structured Co-operation arrangement (Pesco) to ensure interoperability and value for money in defence spending. – Is mise,

Yet contrast the Swiss approach to neutrality with that of Ireland.

The Swiss are closer to the most likely perceived major threat to democracy and have armed themselves to the teeth to make the act of invading Switzerland a very costly one.

This militarisation of the country also acts as a deterrent to aggression in the first place.

On the other hand, Ireland, which is at the furthest distance in Europe from that same threat, has a slightly different approach to neutrality, which is to hope that the foreign invader runs out of bombs, bullets and willpower before they arrive at our shores.

If that doesn’t work, sure, won’t we disarm them with our charm and storytelling? I don’t think so. – Yours, etc,

1 André Leon Talley: How Anna Wintour threw her right-hand man ‘under the bus’
2 WHO warns of potential for ‘immediate second peak’ in Covid-19
3 HSBC board rethinks overhaul and seeks even deeper cuts
4 Archaeologists are ‘quite sure’ they have found Red Hugh O’Donnell’s burial place
5 Silly Billy: What the Ikea bookcase tells us about the true cost of fast furniture
Real news has value SUBSCRIBE