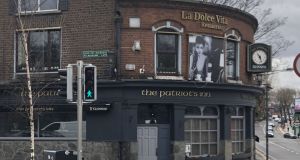 Europe’s current plight is summed up in a two-storey building on a street corner near where I live. Downstairs is the Patriot’s Inn, now closed until further notice. Upstairs is an Italian restaurant, La Dolce Vita, where – as with the way of life the name evokes – business is also suspended for the foreseeable future.

The corner is in one of the most historic parts of Dublin. Hence a sign on the Patriot’s. “This old pub standeth on sacred ground, surrounded by the high walls of the Royal Kilmainham Hospital, by the ancient cemetery of Bully’s Acre, and the dungeons of Kilmainham Jail.”

In fact, within 100 metres, there are three graveyards, because the old common burial ground aforementioned is flanked by the RHK’s two military cemeteries, one for officers, the other for general ranks (the British army maintained social distancing even in death).

This being so, I’ve always found it amusing that the Patriot’s sign also boasts of being close “to the pulse of Irish history”. But the claim is probably justified, given the centuries of drama encapsulated in a crossroads that juxtaposes the jail – birthplace of the Republic – with a military hospital whose first inmates were from the winning side at the Battle of the Boyne.

And of course, as well as being an ancient cemetery, Bully’s Acre also used to be the location of a holy well, St John’s, scene of mid-summer revelry for centuries until the custom was suppressed in the 1830s, when a cholera epidemic finally gave the authorities an excuse to shut it down.

Whatever about holy well water, our latest epidemic has already brought such remarkable news as that report yesterday about Irish Distillers turning whiskey into hand-sanitising gel. We may need even more dramatic miracles before the year is out. In the meantime, the sweet life is on hold, from Italy to Kilmainham, and for now, the duties of patriots include staying out of pubs.

Among the many international events postponed because of coronavirus is an annual celebration in southern California that, for almost a century, has marked the “Return of the Swallows to San Juan Capistrano”.

It should have happened yesterday, March 19th, when the birds traditionally complete their 10,000km flight back from Argentina. And I presume the swallows turned up as usual.

But like so many human activities, the accompanying festival of mariachi music, flamenco dancing, and other fun has had to be deferred.

Speaking of St Johns, there are at least two involved in the story of how this annual event arose. One is the town itself, founded as a Franciscan mission in 1776. The other was a priest, Kentucky-born of Irish ancestry, St John O’Sullivan, who restored what were by then the ruins of the mission, starting in 1910.

His forename requires explanation. You may be familiar with a convention whereby, when used as a first or middle name, the pronunciation of “St John” is telescoped as “sin-jin” or – speaking of alcohol – “sin-gin”. The latter might be more apt for Ireland’s best-known example, Oliver St John Gogarty, who was definitely no saint and now has a pub named after him in Temple Bar.

The convention doesn’t apply to surnames, like that of Pete St John, who wrote The Fields of Athenry. And I have always thought that pronouncing the forename “Sin-jin” was just one of those weird things English people do. But Father O’Sullivan was a “Sin-jin” too, apparently. And according to the SJC historical society, this was because “many Catholics felt [it] improper to have the title St or Saint in a given name” and edited accordingly.

I don’t know. In any case, O’Sullivan’s birthday was March 19th. So he was charmed that the swallows chose that date to return. Legend has it that one summer he saw a shopkeeper, less enamoured of the “dirty” birds, knocking their nests out of his eaves with a broomstick, whereupon the priest invited them to the mission instead.

What is more certain is that, being in poor health with TB, the young and apparently doomed O’Sullivan had been given the posting because it had a warm climate and little work. Then he fell for the place, seeing his own condition in the ruins. And as he threw himself into restoration work, surrendering himself to the present, his health improved.

The mission was fully restored when he died, in 1933. And a few years later, its fame was cemented by a hit love-song of 1940, When the Swallows Come Back to Capistrano. We must hope that the metaphor will get another outing, in happier circumstances, this time next year.