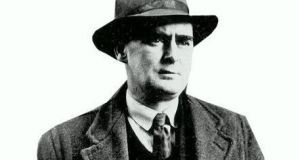 I note with indignation that this year’s “Mylesday” has been deferred by 24 hours to avoid a clash with rugby.

For those who don’t know, Mylesday is a now-annual gathering in honour of Myles na gCopaleen, aka Flann O’Brien, late of this parish.

'In these times of alternative facts, I’m sure Myles would have no issue with April Fool’s Day being celebrated on the 2nd'

And it normally takes place on the anniversary of his death, with tragicomic timing, on April Fool’s Day 1966.

But this year’s April 1st (a Saturday) also sees two European Rugby Cup quarter-finals, featuring Leinster and Munster, the effects of which on Dublin pubs are not expected to be conducive to the celebration of literature.

So John Clarke, organiser of Mylesday, has opted for a strategic retreat to the safety of Sunday. He hopes that, despite the trouble he went to in immortalising the date, the man himself would understand: “In these times of alternative facts, I’m sure Myles would have no issue with April Fool’s Day being celebrated on the 2nd.”

No, John, probably not. But I’m less certain he would have appreciated being displaced by the sport of “alickadoos”, as rugby fans were known in his time.

Mind you, he did experience a short-lived infatuation with the sport once, circa 1950. His friend and biographer, the late Anthony Cronin, was mystified by this, regarding it almost as a medical disorder.

And if it was indeed an illness, Myles must have contracted it during the 1948/49 seasons, during which Ireland won back-to-back Five Nations championships.

In the biography, No Laughing Matter, Cronin attributes to those years a column Myles wrote – topical today – about a drink-sodden trip to Cardiff in which he and his fellow supporters “beat, by sheer lungpower, their living daylights out of the Welsh”.

But in fact that column is from 1951, a year Ireland also finished champions. And in it, Myles gives a vivid account of their 8-3 win in Cardiff that year. Which is a bit confusing, because the actual records for 1951 suggest the Ireland-Wales game ended in a draw.

Closer inspection, however, reveals that the column appeared on the morning before the match. So the Irish win seems to have been an alternative fact, Na gCopaleen-style.

Such comic fiction notwithstanding, his flirtation with rugby did seduce an editor into sending him to Lansdowne Road once, commissioned to write a more conventional account of a game, ie one based, however loosely, on the actual event.

It wasn’t The Irish Times, interestingly, which may have known better. It was the Sunday Press, although after getting clearance from the IT, the Press also took the precaution of lining up a substitute piece in case of mishaps between the final whistle and the Saturday night deadline.

This was wise. According to Cronin, Myles and a companion left the Scotch House pub beforehand “with the miniature bottles of whiskey known as ‘baby Powers’ clinking in every pocket”.

When they got back to the Press office, our hero sat down at a typewriter to attempt a report. But alas, that ended in a draw too – scoreless: “After half an hour or so, it was clear [...] that nothing printable was going to result and so the substitute piece was used.”

The drink was a permanent affliction for Myles. But he seems to have recovered from the rugby, at least. In later years, says Cronin, his column subjected the sport to “incessant attack”.

So yes, it may be wise to keep the two apart this April, in case of trouble. As it is, policemen are expected to feature heavily in Mylesday 2017. The Third Policeman, anyway, published posthumously, 50 years ago this September.

Speaking of Flann O’Brien whodunnits, the editor of a forthcoming collection of his letters, Maebh Long, has been in touch again of late to report a slight setback in her researches.

As noted here before, an important part of Myles’s correspondence are the many pseudonymous letters he wrote to this page, especially at the start his literary career, around 1940. But it turns out that, in the archived copies of the newspaper, as microfilmed in the National Library, many such letters are now missing, cut out at some point by a person or persons unknown.

Maebh would love to know who did this, and if there are unexpurgated originals elsewhere. So would I, although it seems likely that the chief suspect died on April Fool’s Day 1966 and is now beyond the reach of temporal inquiry.

Either way, anyone with information is asked to contact the incident room, via maebh.long@waikato.ac.nz or, if it’s easier, Policeman Fox.