Without proper reflection, it is hard to see what political future unionists have 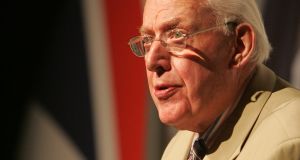 The Rev Ian Paisley: “Unionism has judged itself virtuous using a different marker, which can be found in the way Paisley emphasised the ever-present threats to an idealised moral and spiritual order.” Photograph: Alan Betson

As someone who sees themselves as a unionist, who believes in a shared parliamentary tradition and history, which for all its faults and misappropriations has been crucial in underpinning religious and civil liberties, I am delighted that Sinn Féin is now only one seat behind the DUP.

In fact, in many respects I am disappointed that Sinn Féin is not now the largest political party in Northern Ireland. This may seem an odd position to take, but the problem is that Ulster unionism has forgotten itself – and without proper reflection, it is hard to see what future unionists there have.

The problem is that when we consider European Protestant political culture, unionism in Ulster has inverted the ideal type outlined by Max Weber in The Protestant Ethic and the Spirit of Capitalism (1905). Weber’s ideal type of Protestant is much contested, but for historians it provides a useful interpretative tool for diagnosing the illness with which unionism, in the form of the DUP, is now suffering.

For Weber, two things happened in the Reformation that pushed us towards modernity. One was Luther’s idea of our calling, whereby God had established the structure of society and it is pleasing to God that we simply fulfil our assigned roles, be it citizen, blacksmith, farmer or servant. There was no need for us to do more than this, to perform “good works” as such, in order to earn our salvation.

Calvinists coped with their anxiety over whether they were elect or not by looking for signs of their regeneration and election in the successful fulfilling of their callings. Increased prosperity would be seen as further assurance of redemption. For Weber, this meant the pairing of capitalism with the Protestant ethic.

What appears to have happened in Protestant political culture in Northern Ireland, which stems from the late Ian Paisley and his allusions to an Old Testament Israel marked out as God’s chosen people, is an absence within certain streams of any anxiety over its own righteousness.

In essence, the DUP seems so assured of its own moral and political virtue, of its “godly calling”, that individuals no longer scrutinise their actions according to an ethical code in order to judge whether or not such actions are consonant with virtuous citizenship. Unionism has judged itself virtuous using a different marker, which can be found in the way Paisley emphasised the ever-present threats to an idealised moral and spiritual order. And although the spiritual rhetoric is now much diminished, the sentiment of self-assurance has endured.

This is encapsulated in the DUP’s opposition to equal marriage on moral grounds, and its members’ self-perception that they are engaged in a particular type of moral battle, one which marks them out as virtuous. It is this which has produced the inversion of Weber’s ideal type, where the self-perception of the DUP, in opposing those who threaten its version of an ideal order, has given its members a feeling that they are by default a righteous vanguard.

As a result, unlike Weber’s ideal type, actions are now thought ethical by default, because those taking such actions are fully confident in their own rectitude and mission.

This mentality has blunted the development of an attitude of critical self-reflection. It explains Arlene Foster’s failure to acknowledge that she could have done anything wrong in the fulfilling of her office (in Weberian terms her “calling”) through her handling of the renewable heating scheme and its aftermath. This is despite the fact that in classic accounts of European Protestantism, Protestants looked to uphold the checks on authority as a means of ensuring that godly citizens were not corrupted.

There is a greater sense of irony here, in that in acting as its has, the DUP has challenged another classic trope of European Protestantism: a wider idea of freedom of conscience. After all, it has dictated what form a marriage can take, and marriage in many instances is a religious ceremony.

For unionists, Sinn Féin’s success should be read in Weberian terms, as evidence of the DUP’s failure. It should lead to a sense of anxiety over a need to fulfil office, and deliver prosperity, in order to have some assurance that one is a virtuous citizen.

Mark Hutchinson is a lecturer in early modern history at Durham University.