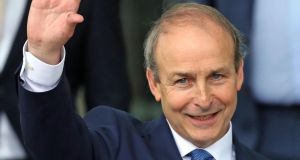 “The problem for Micheál Martin is that he has no real electoral mandate to be Taoiseach having lost the election.” Photograph: Niall Carson/PA Wire

Many years ago my late brother Brian Lenihan was invited to make the annual oration to Michael Collins at Béal na Bláth. It was a nice gesture from a committee that included the Fine Gael deputy Jim O’Keefe. It was at the height of my brother’s role as minister for finance during the financial crisis and one of the proudest things he was asked to do before he died.

It seemed to mark a reconciliation between what were then considered the two main Civil War parties. Perhaps by the time the State gets to commemorate the Civil War in two years’ time there will be an opportunity to bury the Civil War hatchet once and for all. Micheál Martin may yet go down in history as the man who made this possible.

But if the election marked a great failure for Martin then the post-election period of drawn-out discussion about government has been an even greater failure. By continuing to rule out discussions with Sinn Féin, Martin handed over the power and negotiating leverage to Fine Gael and the Greens. Fine Gael has been given the key economic ministries while the Greens will drive the climate-change agenda.

The evidence, already there, from the post-election opinion polls is that Fianna Fáil is being squeezed by an even more resurgent Sinn Féin and a recovery in Fine Gael’s fortunes as the electorate rewards it for its response to the Covid-19 crisis. The problem for Fianna Fáil in government will be that its identity seems very unclear while that of its coalition partners is well defined.

In the post-election period up to the formation of the Government, Fianna Fáil TDs faced a pernicious choice between extinction and rebellion. Rebellion would have involved reversing on their refusal to enter discussions with Sinn Féin and facing the consequences but at least acknowledging the result of the election. The extinction of the party is now a distinct possibility and privately a fear of many of its members.

Veteran Fianna Fáil ex-minister David Andrews spoke in support of Micheál Martin at the party’s recent ruling national executive meeting. In a rare appearance at that body he endorsed a coalition with Fine Gael. He went further and admitted he had been a supporter for many years of a merger of the two parties. Apparently you could have heard a pin drop in the room. Given David Andrews’s age and eminence few in the room were inclined to tackle him on this assertion. Andrews has always been a quirky operator within Fianna Fáil. He has surfaced the issue nobody wants to address in the party. The inconvenient truth is the Fianna Fáil coalition with Fine Gael makes a merger a serious possibility. That debate about Fianna Fáil’s future viability will be a painful one.

The choice for party members will be as difficult for them as I am sure it must be for Andrews. His nephew Chris Andrews wrestled with the same issue after the 2011 election and, unlike his uncle, chose to join Sinn Féin for whom he now sits as a TD at Leinster House. The Andrews family has always been ahead of the great game of politics.

The rotating taoiseach arrangement with Fine Gael will give Fianna Fáil TDs enough time to consider the party’s future. It is presumed that a new leader will be ready to take charge in two years’ time when Fine Gael takes over the role of taoiseach. The dramatic disappearance of Jim O’Callaghan from public view and his non inclusion in the Martin Cabinet has been the source of comment. The failure of the party’s deputy leader, Dara Calleary, to achieve full Cabinet status has caused great disappointment among his supporters.

At a larger level it is possible within the next few years there will be a change of leadership in all three of the new coalition partners. The Greens struck out on this road before even agreeing to the deal with the party’s deputy leader, Catherine Martin, putting her cards open on the table. Simon Coveney and Paschal Donohoe must also be itching to get their chance as taoiseach once the Fine Gael turn comes in two years’ time. This will add to the complications of government over the next two years.

The problem for Martin is that he has no real electoral mandate to be Taoiseach having lost the election. The same issue confronted Leo Varadkar when he took over as taoiseach from Enda Kenny without having fought an election. Martin will be well capable of managing the diverse set of players around the Cabinet table but will face real political challenges in terms of the twin challenges of Covid-19 and the onset of an unruly Brexit by the UK from the European Union. Being in government, for Fianna Fáil at least, is no longer the safe haven it used to be.

Conor Lenihan is a former Fianna Fáil minister for science, technology and innovation

1 Garda detective charged with making death threats against ex-partner
2 How fraudsters used lockdown to lure Irish victims into boats and caravans scam
3 Miriam Lord: Minister for Agriculture tries to get himself out of the manure
4 Airborne coronavirus: What you should do now to stay safe
5 Storey funeral highlights fundamental problems with Sinn Féin
Real news has value SUBSCRIBE