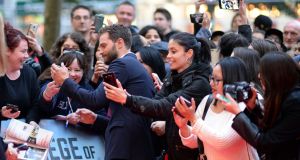 Attending a Dublin premiere of The Siege of Jadotville on Monday, I had an unexpected insight into the plight of the Irish UN troops who found themselves so hopelessly surrounded in the Congo, 55 years ago this week.

As the opening credits stated, the screenplay is “based” on a true story. So, being only dimly familiar with that story, I tried to maintain the usual reserve with its dramatisation. But the film packed a powerful punch (literally, in one scene, when the hero decks Gen McKeown, Army chief of staff), against which resistance became useless.

The deployment of big guns, especially a lethal 165-pounder known as Jamie Dornan, had the row of women behind me ready to surrender in scene one. And when Dornan appeared on stage afterwards for a Q&A, we were all reduced to responding with small arms: clapping the ends of them together, as we had done for the film itself.

Then, just as the audience thought that was the end of the assault, we were attacked from the rear of the cinema by surviving real-life veterans of the siege. They mounted the stage to yet another ovation. In the process, they had swept through the line that divides things “based” on true stories from the true stories themselves.

So amid the clapping, I fell to talking with a man beside me about the tension between facts and drama. He was old enough to remember the original events, but couldn’t, much. And while agreeing that, if the film was accurate, the soldiers had been shamefully mistreated, we both realised we needed to re-read the history.

As I have since learned, the film-makers did not exaggerate much, if at all, the Machiavellian intrigues that put the troops in such an impossible situation.

They were dropped in it (in every sense) by an overreaching United Nations, personified by head of mission Conor Cruise O’Brien, and by an Irish government eager to play a part in international policing while also anxious not to annoy any big powers.

It was the twilight of imperialism, but high noon in the Cold War. Everybody wanted a piece of the Congo, or at least of breakaway Katanga, with its cobalt and uranium. But what nobody there wanted, it seems, was a peacekeeping force. And when the peacekeeping turned into something more aggressive, the Blue Berets became even less welcome.

Scandalously, the Irish in Jadotville were not told about an operation in which UN troops assaulted rebel-held (but mercenary-led) positions elsewhere. So first they faced a revenge attack, unwarned. Then, as the attacks and attackers multiplied, their superiors were unable to send reinforcements.

Led by Comdt Pat Quinlan, the A Company’s resistance over several days has been called an “Irish Rorke’s Drift”, with 150-odd defenders holding out against 3,000. But leaving aside the fact that there were plenty of Irish at Rorke’s Drift too, there were big differences between this and 1879.

On the one hand, the French and Belgian-assisted Katanganese were a lot better armed than the Zulus; they even had a fighter jet. On the other, unlike the Zulus (and here I should issue a PLOT SPOILER ALERT covering this and the next two paragraphs), they didn’t manage to kill a single member of the garrison.

On that point, the film’s fidelity to truth is especially impressive. Cinematic drama demanded heroic deaths among the defenders. Indeed, during the Q&A, the screenwriter admitted having felt some pressure to “kill off one or two”. And there are notorious precedents for people who reached old age in real-life but in film died young – remember Ned Broy in Michael Collins.

But the film-makers exercised heroic restraint in this respect. The defenders all survive the cinematic shooting, as they did the real thing. It was only shortage of water and ammunition that forced their ultimate surrender – an entirely sensible decision, although it tainted them for decades afterwards.

They shouldn’t have been there in the first place. And once there, they were abandoned and disowned. In the meantime, those who had sent them were busy fighting their own rearguard actions.

O’Brien appears to have been as dedicated to self-preservation as to world peace, although he at least could claim a civilian’s pardon, unlike McKeown. Chatting to one of the veterans after the film, I had a small question about his commander (played by Dornan). “Did he really punch the general?” I asked. The veteran replied: “He didn’t punch him hard enough.”