Madrid was not prepared to make detailed case against vote, but rather insisted it was illegal

Spanish Civil Guard police in riot clashed with people gathered outside Catalan president Carles Puigdemon's polling station in Girona minutes before he was due to vote in a referendum on Catalan independence from Spain. Video: Reuters 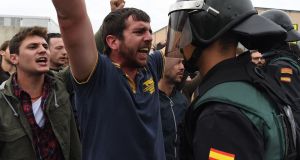 Crowds raise their arms up as police move in on members of the public gathered outside to prevent them from voting in the referendum at a polling station in Catalonia. Photograph: David Ramos/Getty Images

In September 2015, as Catalonia faced elections in which the question of independence was at the top of the agenda, the Spanish prime minister Mariano Rajoy held a press conference with Angela Merkel, at which the German chancellor made clear her opposition to Catalan independence and her support for Rajoy.

While in Berlin and Madrid this might have seemed like a good idea, in Catalonia, a region in the process of reimagining itself and thus deeply involved in the legacy of its own oppression, it was deemed ill judged and unfortunate. And even though the comparisons are unfair and unfounded, it escaped nobody in Catalonia that the last time a German chancellor had sided with a right-wing Spanish politician against the Catalans was when former dictator Francisco Franco was seeking to win the Spanish civil war.

The Spanish attorney general, José Manuel Maza, has refused to rule out the possibility of arresting Carles Puigdemont, the president of the Catalan government, who is organising the October 1st referendum on Catalan independence. While, once more, this might seem a good way for the Madrid government to establish its credentials with the rest of Spain, it merely reminds Catalans of the arrest of the Catalan president Lluís Companys in 1934, when he had declared a Catalan state, and his second arrest by the Nazis in 1940 and his subsequent torture and execution at the hands of Franco.

In threatening Puigdemont and arresting Catalan politicians and sending the Guardia Civil into the streets of Barcelona last week, the Madrid government is driving a further wedge between Spanish centralism and Catalan separatism and increasing the long-held sense of grievance in Catalonia.

In any normal situation, Puigdemont would be a gift to Europe. He is a pragmatist, a centre-right politician, close in ideology to Emmanuel Macron and Merkel. His party has traditionally been pro-Europe, pro-business. Across from Puigdemont’s seat of power in Plaça Sant Jaume in Barcelona, in the town hall Ada Colau, the mayor of Barcelona, is a popular and committed left-wing politician, also part of the European political mainstream.

Since both are known to be calm, thoughtful, rational democrats, and since both are vehemently in favour of holding the referendum, as indeed are more than 70 per cent of the Catalan electorate, it might seem difficult to fathom the strategy of the Madrid government as it seeks to demonise all those who support the referendum.

Madrid was not itself prepared to make a detailed case against the vote being held, but rather insisted that it was illegal, as though the law were something that could not be changed.

It is curious also that Madrid politicians have not been travelling the length and breadth of Catalonia – as, say, Gordon Brown did in Scotland in the run-up to the independence referendum there – to make the argument against the referendum and against Catalan independence.

Why have these politicians stayed in Madrid? Why did we not hear from them on the independence question in Catalonia this summer? Why have they offered coercion rather than argument?

One reason is the work of a woman named Aina Moll, who was born in Menorca in 1930. A philologist, she was director-general of linguistic policy for the Catalan government between 1980 and 1988. She worked with Miquel Strubell, who had studied linguistic psychology and bilingualism, and who from 1980 was head of what was known as linguistic normalisation in Catalonia. With their team, they became convinced that the only way Catalan as a language would survive was total normalisation and immersion. Unlike Irish, for example, Catalan was not associated with poverty. It was spoken by middle-class urban people as much as in the villages and in the foothills of the Pyrenees. In the years between 1939 and 1975, however, the use of Catalan in public was banned by Franco. In those years it became a private, family language.

This began to change in the 1980s, with Catalan radio and television, with the publication of a daily newspaper in the language. Many books were translated, and lessons in schools and lectures in universities were given in Catalan. Slowly, it became possible to live and work in Catalonia without having to bother too much about Spanish.

When I interviewed Moll in 1980, I noted her determination and almost scientific approach to restoring the full and extensive and, if possible, exclusive use of Catalan in the public realm. The project was to make it the first language of Catalonia. Spanish would be there too – all Catalans are bilingual – but it would essentially have a secondary role.

One day in the mid-1980s, when I was having lunch in a Barcelona restaurant with one of her advisers, he asked for the menu in Catalan to be told that it was only in Spanish. He smiled, and said to me that the restaurant would get a warning within a week and would be threatened with closure within a month unless it printed a menu in Catalan.

In 1988, as I came out of Mass in the monastery at Montserrat, to the north of Barcelona, I met a couple from Madrid who were fuming. The Mass had been celebrated in Catalan. Since this was a popular place of worship, they said, why could Mass not be in Spanish so that everyone could understand?

Such rage against Catalonia became common. The bar-room version is that Catalans are clannish, mean with money, and filled with nationalist bigotry and effrontery. The Catalans, in turn, have a horror of bullfighting and view people from Madrid as less than hard working. They also take the view that they are paying more money into the central coffers than they are getting back, and that there is a policy in Madrid to undermine Catalonia as an industrial and financial powerhouse.

But there is also the numinous question of identity and emotion around nationality. Many Catalans do not “feel” Spanish. They have spent the years since the death of Franco recreating their country, taking what power they can and using it to consolidate the idea of Catalonia as a place as worthy to be a state as any other European country.

The success of the policy on language is the main reason why Spanish politicians have not been visiting towns and villages in Catalonia, and not speaking on radio or TV to make the case against the referendum. Catalonia, for them, has become terra incognita. If Rajoy or his attorney general were to visit the heartland, they would find that no one had heard a political discussion in the Spanish language before, and they would notice also a strangeness, a sense that they themselves were in a foreign country.

The arrival of the Guardia Civil in Barcelona and the arrest of politicians seemed disproportionate.

The argument Catalans make is simple: why should the right to be a state not extend to them if the majority of them should wish to be no longer part of Spain?

Unlike Northern Ireland and the Basque country, Catalonians have sought to win the argument using constitutional methods. They have not resorted to violence. Thus the arrival of the police in Barcelona last week, the arrest of politicians and the threat of further coercion from the Spanish state seem disproportionate. Instead of frightening people, however, it has steeled their will. Instead of weakening Puigdemont, it has strengthened his position.

Although the polls say the independence side would not win a referendum, the Catalans, watching Brexit, have seen how easy it is for polls to be wrong, especially on voting intentions. One connection between the situation in Britain and Catalonia is that just as David Cameron felt impelled to call a referendum because of forces within his own party and to his right that were against Europe, Puigdemont is sharing power with parties who are even more fervent and militant than he is on the subject of Catalan independence.

Were he to stand down on this issue, Puigdemont knows how easily he and his party would be marginalised.

The graphic scenes of coercion created this weekend will serve to reinforce the idea in Catalonia that the only future the region has is as a fully independent state. Indeed, the more Madrid gets to know Catalonia, courtesy of this stand-off, the more it will come to realise that, in many ways, Catalonia is already quite independent and separate from it, and more different as each year goes by.

1 Irish tourists excluded from visiting Greece as country begins its tourism season
2 We need to pay very close attention to what is happening in Britain now
3 Remaking Ireland: Five positives from the pandemic
4 50 things to do in Ireland this summer
5 Connell losing touch with the club championship is the real tragedy of Normal People
Real news has value SUBSCRIBE