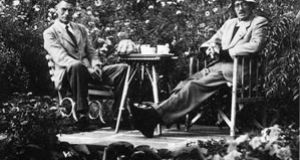 Though Samuel Beckett’s writings dissect the ironies and agonies of family, his personal life was far less “family-phobic” than is often thought. True, he married his long-term (and stoically tolerant) partner Suzanne only after long years together, but his correspondence contains many letters signed “from both of us to both of you”.

This troubled yet constant son was also a deeply committed brother and uncle. James Knowlson’s biography relates how he rushed to Dublin in late May 1954, on hearing of his older brother Frank’s diagnosis of lung cancer. He stayed at the house in Killiney until a fortnight after Frank’s death on September 13th.

Thus Samuel Beckett, who had turned his back on Ireland, cleaving to his new French roots even through wartime, who had just found real fame in Paris with Godot, hurried home to be at the side, soon only the bedside, of the dying brother whose life had been so very different.

They had shared many youthful enthusiasms, including chess, cycling and swimming. Many of these, especially walking, “cycle polo” and golf, had been shared also with their beloved father, Bill. Frank duly followed Bill as captain of Carrickmines – but golf epitomises the brothers’ divergent adult lives.

Who could imagine Sam, a passionate golfer as well as first-class cricketer for Trinity, as captain of anything? Bill and Frank are on the roll of honour in the clubhouse, while a bench in a grove of Swedish whitebeam beside the seventh green simply commemorates “Samuel Beckett, Author and Past Member”.

Frank carried on their father’s quantity-surveying business on Clare Street, a stone’s throw from Sam’s abandoned alma mater, Trinity. Further diverging from Sam’s trajectory, he became a churchwarden in Ballybrack. Yet when Frank was struck down, all these differences, so crucial to Sam the writer, were as nothing to Sam the brother.

Knowlson calls the summer of 1954 “one of the most terrible times” of Beckett’s life, “comparable only with the deaths of his father and his mother”. He helped Jean to care for her husband, shaving him in the morning and sharing a pre-lunch whiskey, and spending time in the garden for as long as Frank could manage.

They sat together in the garden, where Sam dug out Frank’s long-envisaged lily-pond. When Frank could no longer leave his bed, Sam brought him his meals and chatted to him, maintaining the pretence of normality as long as possible. In mid-August Frank was told of his impending death, by Sam himself, according to Anthony Cronin.

Sam continued to nurse Frank and entertain his beloved niece and nephew after school, frolicking with their cats and playing on the Bechstein piano. At evening he walked Killiney beach, often alone, sometimes with a family friend to whom once, in a phrase that perhaps only he could redeem from cliché, he sighed: “It’s like the tide going out.”

He wrote to Pamela Mitchell, with whom he had recently started an affair, how while the others slept, he sat “drinking a last beer . . . and the sound of the sea on the shore, and my father’s death, and my mother’s, and the going on after them”.

Knowlson details how this anguish informs Beckett’s Endgame, including its references to the brothers’ shared passion for chess.

My enthusiasm for Beckett dates from adolescence. Only recently did I realise that, during some of these events, I was myself only a literal stone’s throw away. My family spent a month or so of that summer in the home of relatives who were abroad on holiday. Their house stood across a steep lane, more boreen than roadway, from Jean and Frank Beckett’s house.

My seaside exploits were more diurnal than Sam’s: swimming, sandcastles, padding up the sun-bleached timber slipway to Stanleys’ for (on a good day) four-penny wafers, or the exotic new potato crisps. On an even better day we might be brought the other way to the more upmarket TEAS, spelt out like Joyce’s HELY’S near White Rock.

Our paths must have crossed sometimes by day, but usually I’d have headed home from the beach with other Killiney cousins long before Beckett could have embarked on his evening walk. If only he’d known . . .

Knowlson tells how a trip to the Gaiety, and one or two to art galleries, accentuated rather than relieved Sam’s burden: his brother’s home was, and had to be, his place that summer. This might be one reason why neither Sam, nor his biographers, paid much heed if any to an ironic coincidence.

On June 16th, 1954, the 50th anniversary of the original Bloomsday, Samuel Beckett was in Dublin, just down the coast from Sandycove, where the Bloomsday cult was being launched by a group of writers, including his future biographer Anthony Cronin.

Beckett could hardly have missed how this newspaper – especially “An Irishman’s Diary” – anticipated and reported the events later so vividly recounted by Cronin and the late John Ryan. We needn’t invoke “the break with Joyce”, or Sam’s loner tendencies, to explain his absence from these proceedings; he was steadfast in his harrowing vigil.

Joyce notoriously believed that Ulysses had quasi-magical powers; this newspaper indeed pondered whether they had conjured a prediction for the 1954 Gold Cup. But did Beckett reflect on another, truly weird, connection between “The Book” and his situation in Killiney? Another story, for another day.

1 Coronavirus: 133 patients in intensive care as pressure on hospitals builds
2 Look on the bright side: International Space Station visible in Irish skies tonight
3 A letter to Ireland from Italy: this is what we know about your future
4 Coronavirus: Letters flow to self-isolating father whose children were found dead
5 Tempers fray as coronavirus lockdown fatigue hits Italy and Spain
Real news has value SUBSCRIBE