Repeat vote would reinforce sense of insignificance in dejected electorate

British Brexit minister Stephen Barclay says there is no consensus in parliament on holding a second referendum on leaving the European Union, or on what the question would be in any such vote. Video: Reuters 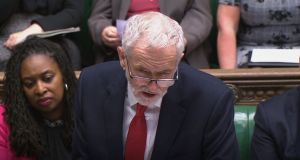 Jeremy Corbyn said Labour would back a second referendum to stop a no-deal Brexit. Photograph: House of Commons/PA Wire

Once lost, trust is very hard to earn back. And while lies, false promises and spin have long been staples of political life, there has always been at least the semblance of trust between politicians and their populaces.

But the Brexit vote has revealed just how untrustworthy our political representatives are in Britain. Last year the great and the good of the British political elite celebrated the centenary of the Representation of the People Act, which gave the vote to propertied women of a certain age. And yet, in the same breath that they cheer the historic fight for enfranchisement they look for a means to stop the Brexit vote from being enacted, one way or another.

Earlier this week, the prospect of a second referendum became ever more likely as the Labour Party announced its support for what it called a “public vote to prevent a damaging Tory Brexit”. This wasn’t much of a surprise – Labour has made it clear that it is willing to sacrifice its Leave-voting support base in the North of England in favour of its middle-class Remainer membership in places such as London.

But though many of his supporters have forgotten, there are those of us who remember that the Labour leader Jeremy Corbyn spent most of his political career speaking out against the European Union. In fact, a video has resurfaced of him addressing No voters at an anti-Lisbon Treaty rally organised by the Irish Anti-War Movement in 2009. In it, he warns campaigners not to “scrap your posters” because “I’ve just got a feeling they’re going to keep on voting until they get the answer they want.” And he’s right – a second referendum is merely a means for the British political class and the EU to get the answer they want. Given the fact that an estimated 90 per cent of MPs voted Remain, it’s quite clear that seeing the Brexit vote through isn’t that answer.

Corbyn is not the only British MP who has backtracked on Brexit. In 2016, former Tory (and now member of the ramshackle Independent Group) Anna Soubry promised that she “could not go back” on the fact that she “told people that if we voted Leave, we would”. Fast forward a few years and she’s leading the march for what she calls a “people’s vote” to stop Brexit. It’s hard to think back two years to February 2017, but it’s important to remember that the vast majority of MPs voted to trigger article 50, thus signalling their intention to see Brexit through. Four months later, the 2017 general election solidified that intent with the vast majority of MPs elected on manifestos promising to secure Brexit. Public support for Brexit hasn’t changed – so why do politicians feel free to go back on their word?

Irish onlookers might know how it feels to be treated like schoolkids who haven’t given teacher the right answer in a quiz – referendums are pretty common in your political landscape. So virulent is your dislike of Brexit that you might even feel glad that the British people could be forced to vote again. But it’s worth putting Brexit to one side to look at the wider ramifications of a second referendum.

For decades the main feature of British politics has been apathy – with low turnouts at general elections, mass cynicism about politicians and a sense that politics is something to be managed by MPs rather than shaped by public engagement. And for a long time now, people on the left like me have been looking for something to combat the sense of defeat that has pervaded British society since the Thatcher years. What more proof do dejected voters need of their insignificance, than the British political elite forcing them to repeat their vote? Are we really asking people to beg for the kind of politics they want?

My gut tells me that, despite this declaration of open support for a second referendum within Labour, it remains unlikely. Not because British politicians are principled about upholding the Brexit vote, but because a second vote would be a very dangerous choice. Not only would it prove those of us who have been concerned about the state of British democracy right, but it would completely destroy any remaining trust in politics for an entire nation. Trust has to be earned - it is not bestowed from on high or conjured up by skilful political manoeuvring. I have the feeling that Brexit voters are the kind of people that hold a grudge. Be warned – once you’ve lost our trust, you might not get it back.

Ella Whelan is a writer and columnist with Spiked

1 Late Late Toy Show duet with musical hero ‘absolutely mad’ says delighted teen
2 Ireland’s teenage pariahs: ‘We are really at breaking point now’
3 Jim McGuinness: There is a way to save championship and make it competitive
4 Michael J Fox: ‘In the wheelchair, I’m luggage. No one listens to luggage’
5 Waterford turn Kilkenny upside down and inside out
Real news has value SUBSCRIBE