What every troika visitor should know 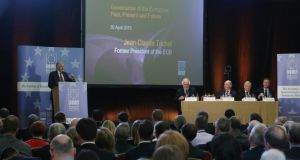 Following the visit of former European Central Bank president Jean-Claude Trichet to Dublin, it appears necessary to draw up a special post-bailout guide for visiting troika dignitaries and foreign leaders.

1 Watch the “pixie heads” TV clips: Comedian Barry Murphy’s send-ups of Germans lecturing Ireland are hilarious, but like all good comedy they have an edge. We were fed up with being told what to do and now we are fed up being patted on the head for doing it. The message we often hear from visitors is that we were in a mess and they saved us. Perhaps it’s better to start from the position that we were all in a mess together. And don’t tell us how great we are for sticking with it.

2Feel the bondholder mood: Bondholders have now overtaken Cromwell, the Black and Tans, and Thierry Henry on the Irish public hit list. You may feel that this is a bit overdone – some were short-term speculators for sure, others were ordinary investors. And, as Trichet argued, no legal mechanisms were in place at the time to allow them to be “burned”. But by putting in place rules to ensure bondholders take a hit when a bank goes bust, the EU has surely conceded this is what should happen. This should be acknowledged.

3 Choose your platform wisely: If you are invited before a parliamentary inquiry, best to show up in the same way as everyone else. It was good that Trichet came, but his decision to answer questions from inquiry members, but not at the inquiry itself, was contrived and the legal excuses given are unconvincing. At least the interchange between the committee members and the former president was given time and there was some debate both in the course of this and in subsequent media interviews. We should acknowledge Trichet showed up.

4Concede that during the crisis everyone was making it up as they went along: Big bureaucracies rarely admit this. During the crisis everyone was just trying to get to the next day. Yet officials who visit from the European Commission, ECB and International Monetary Fund try to give the impression that, while they faced unprecedented challenges, they always had things under control. This leads to a distorted view of how events actually unfolded. It is clear from the Trichet letters to Brian Lenihan, for example, that the ECB was in a panic late in 2010 and that pressure was put on this country to go into the bailout, with the threat being a withdrawal of EU support for our banking system. The ECB had extended extraordinary support to our banking system, amounting to some €140 billion, and wanted it back. It clearly stepped over the line in demanding a range of budget measures, not an area where a central bank should become involved. The ECB also will have known – a fact not properly transmitted to the Government here until late in the day – that the Irish situation had been discussed at a summit of the so-called G20 big countries a couple of weeks earlier, when the issue of repaying all senior bondholders was also discussed. Ireland could have been dealt with more openly and reasonably in the chaos of the time, even if by then a bailout was inevitable.

5Admit to mistakes: If big bureaucracies rarely concede how events can cause them uncertainty, they never admit to mistakes, or to having had procedures that failed. So Trichet in Dublin emphasised warnings he gave on competitiveness trends in the run-up to the crisis and how big countries rode roughshod over budget rules. This is true, and important. Yet the ECB, like other big international players, completely failed to see the crisis coming, to the extent that it even raised interest rates in July 2008. Trichet was right that national central banks were responsible for regulating their own banks, but this does not absolve the ECB from its failure to spot the systemic risk to stability. To learn about the past, and for the future, we need to understand why things went wrong.

6Don’t play the “Monday morning quarterback”: If there is one thing more annoying than senior officials never admitting they got anything wrong, it is when they say, a few years on, that they realised things were wrong but did nothing about it. A number of senior IMF officials, most recently Ajai Chopra himself, have spoken out about aspects of Ireland’s crisis. Chopra said the ECB treated Ireland terribly. Why didn’t he do something about it at the time? The IMF also failed to persuade the other key players that senior bondholders should be hit, a view which they say they held.

7If you want to debate the bondholder issue, dive right in: The argument for repaying senior bondholders tends to get no further than the assertion it would have been too risky not to. The debate needs to go deeper. It is not a contradiction to argue that what looked like the best decision was made at every step, even if the result was that Ireland got a raw deal. As the crisis went on and the scale of Anglo losses became clear, there was a strong argument to hit its senior bondholders, even if much of the debt was repaid before the bailout. But asserting that it would have been too risky and there was no choice annoys people more. There was a choice – and it was made.

8Watch the pixie head TV clips again. Talk to the taxi driver on the way from the airport about the bondholders. Ask anyone about the USC: Now you’re ready. Twitter: @CliffTaylorIT