Cliff Taylor: Conservatives will have to start abandoning their Brexit lies 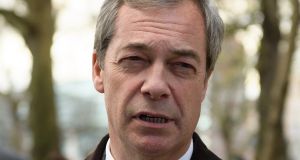 Former Ukip leader Nigel Farage. He is probably right when he tweeted that Britain was now moving on “the next phase of humiliation”. Photograph: Leon Neal/Getty Images

The Irish Border was such a hard problem to get agreement on because it goes to the very heart of the big Brexit contradiction. This is that the UK can find a way to leave the EU trading bloc and still maintain free trade with its former partners. This was the lie that was sold during the Brexit campaign, which is now unravelling before our eyes.

Everyone has now agreed that a hard border on the island of Ireland should be avoided, but nobody is yet sure exactly how this will be achieved. That said, the deal was worth doing for Ireland. By tying down key commitments from the UK it strengthens our position in the talks to come. The Government faced some flak for holding out, but it was the right call.

More battles lie ahead. Depending on how the talks progress, there may yet be rows about the details of the deal, about exactly what a “hard border” is, and about what “regulatory alignment” would entail. Ireland has got the pitch set up in its favour, but the match still has to be played.

As of now we don’t know what Brexit will look like. We don’t even know what kind of trade deal the UK government wants.

The UK cannot simultaneously escape from EU rules and regulations, control immigration, do trade deals with third countries and have a trade deal with the EU which works something like current arrangements

We were told this week – amazingly – that the Conservative government had not yet “had the discussion” about what kind of trade arrangement it wanted. This is because, like a family Christmas dinner, they know that bringing up touchy issues will inevitably lead to a big row. But the hard discussion cannot now be delayed as the UK must outline its wishes ahead of phase two.

Theresa May struggled this week to keep all the plates up and spinning. But this isn’t going to get any easier for her. Nigel Farage is probably right when he tweeted that Britain was now moving on “the next phase of humiliation”.

Before long the Conservative government will have to decide which of the lies told during the Brexit campaign it will abandon first.

The UK cannot simultaneously escape from EU rules and regulations, control immigration, do trade deals with third countries and have a trade deal with the EU which works something like current arrangements.

There appears only a few ways this can go now. If Britain wants a free trade deal with the EU which approximates what it has currently than it might as well stay in the customs union and the single market, or something very close to it. Then the UK would have to abandon its key Brexit principles and continue to abide by EU rules, give up the chance of doing it own trade deals, and probably continue to accept the jurisdiction of the European courts.

The logic of the agreement signed this week points in this direction – towards a softer Brexit. It is the way to achieve Brexit and meet the commitments of this week’s deal on avoiding a hard border and allowing continued free trade between the North and Britain.

But can the UK sign up for this short, perhaps, of a general election?

The second possibility is at the opposite end of the spectrum – a “no deal” Brexit where the talks collapse in acrimony and the UK leaves without any agreement. This would be chaos, and cause huge economic and social damage in the UK and significant upheaval here. It is still a risk despite the progress made.

Is there a middle way? There might be if May keeps the show on the road. A fractious trade negotiation might end up with the UK accepting that it cannot have completely free access to the EU market and achieve all its other goals at the same time. This would push it to accepting less favourable trade access than currently exists. Many experts point to the deal done between the EU and Canada – it took seven years to negotiate – as a template.

You would still wonder about the enormous complexity of negotiating this but maybe it is possible. It would leave the UK in a worse economic position, although allow it to hold on to some of the political goals of Brexit.

Our three outcomes have different implications for the Border. If the UK remains in the single market and customs union – or something close to it – there is no Border problem and Irish/UK trade can continue unhindered.

If the UK crashes out without a deal then all bets are off. The agreement reached this week was for inclusion in a joint EU/UK withdrawal bill. But if the talks fall apart before this is agreed, then the text makes clear that all agreements are void.

The deal done this week becomes particularly relevant if the middle route is taken and the EU and UK gets into the messy territory of tearing up existing arrangements and negotiating new ones. Ireland will hold to the “no hard border” guarantees, and, if necessary, the backstop of regulatory alignment on the island to avoid a trade border. How to achieve this would be the UK’s problem. This is when we might get into the rows of how you define a hard border and how to achieve it.

But the next drama, you would suspect, will be played out in London. They need to tell the EU side what kind of trade deal they are looking for. Can they decide?

And can the UK government hold together as the trade-offs of whatever route are chosen quickly become clear? Because, as has been made abundantly clear, the EU side is not for turning.

The Christmas goodwill spread by the Border fudge may not last too long into 2018.