Cliff Taylor: In aviation there is no fall-back position in a no-deal Brexit

When the UK leaves the EU and becomes a ‘third country’, it ceases to be part of the fully-liberalised EU aviation market 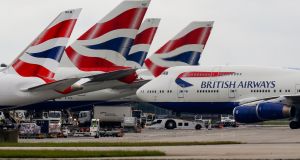 UK airlines fly to the US under the so-called Open Skies deal. There can be no guarantee that the US will agree to replicate the terms of this for UK airlines post-Brexit

Sometimes you wish you had never started something. Taoiseach Leo Varadkar’s comments on planes not flying after Brexit and some follow-up commentary and blogs had piqued my interest. A few days later, buried in a sea of acronyms for the different bodies that regulate the airline sector and confused by the legal uncertainty of what happens in a no-deal situation, I was having second thoughts. Yet in a way the complexity and uncertainty is the point.

As in so many other sectors – and perhaps more so than in most – the rules and regulations under which airlines fly have built up over years, based on different pieces of legislation, a variety of agreement, a bewildering array of “bodies” and simple custom and practice.

Once the UK leaves the EU a whole host of questions emerge, none of them straightforward. And in the case of a no-deal Brexit, yes, there is a chance that the planes won’t fly, at least for a while.

The first thing to understand about the aviation sector is that if there is no deal between the EU and the UK there is no automatic fall-back position.

For trade in many areas we are all used to hearing that, in the event of no deal, then the two sides will trade with each other on the basis of rules set down by the World Trade Organisation (WTO). This, at least, would set some kind of benchmark as to how things might work, even if the insouciance of the Brexiteer lobby towards this possibility is entirely misplaced.

But there are no WTO rules in aviation. There is no place to fall back to in the event of a no-deal Brexit. Nobody would be sure what happens next. Yet everyone would know there is a problem.

Once the UK leaves the EU aviation market a host of question present themselves. But staying in as a fully paid-up member requires accepting EU rules and the oversight of EU courts, precisely what the UK is trying to escape.

So what do we make of the Taoiseach’s assertion – a point also made by Ryanair’s Michael O’Leary – that planes might not fly?

Correct, unless some way is found to avoid this happening.

Landing rights, safety regulations and so on are all part of complex agreements. And as the UK leaves the EU and becomes a third country, it will, as the Irish Aviation Authority confirmed in a statement, cease to be part of the fully-liberalised EU aviation market.

And this means, against quoting the Irish Aviation Authority, that “all current EU law-based rights, obligations and benefits will cease, including current traffic rights between the EU and UK, current ownership and control rules, and the UK’s participation in the European Aviation Safety Agency. ”

Let’s look at one of the key points – safety. The European Commission has pointed out that after the UK leaves the clearance that the British authorities give in a whole range of areas from airworthiness, to permits to fly, maintenance, pilots licences and medical certificates, cabin crew licences, certificates for air traffic controllers – and on and on – will no longer be valid in the EU.

So if UK planes are to be allowed to fly into the EU this needs to be sorted.

UK airlines would need to apply to fly into EU airports as so-called third country operators. As author and blogger Richard North has pointed out, the rules require an application for a third-party licence “at least 30 days before the intended starting date of operation”. Given that, as things stand, this application cannot be made until the UK leaves, this risks at least a temporary break in service after Brexit.

And beyond that there will be uncertainties about whether current service levels from the UK to EU airports can continue (doubtful) and whether prices to consumers will go up ( likely ).

And there is more.

UK airlines fly to the US under the so-called Open Skies deal. There can be no guarantee that the US will agree to replicate the terms of this for UK airlines. There are discussions about whether the UK could fall back on old bilateral agreements it had with the US and other EU countries, but as these were signed many years ago and superseded by EU deals it is far from clear whether this is possible.

There are also implications for the ownership structure and operating bases of airlines – a number of UK players are setting up bases within the EU, and airlines will have to ensure a majority EU ownership of their shares.

Even in the area of overflights things are not entirely straightforward. Under an agreement called the Chicago Convention, signed by 52 countries in 1944, it is widely thought that the rights of planes to fly over other countries is protected. But article one of the convention states: “Every state has complete and exclusive sovereignty over airspace above its territory.” A statement from the European Commission, in response to questions on this, said: “Any access to, from and through a state’s airspace must be permitted.”

Of course, goodwill could sort much of this out. But goodwill is missing at the moment, and a successful conclusion of the Withdrawal Agreement is in the balance.

The aviation situation clearly shows us one thing. When the UK leaves it is essential that the transition agreement – the standstill until the end of 2020 – comes into play. This would maintain rules for aviation, and everywhere else, as they are, and allow the planes to continue to fly. It could give time to sort out longer-term arrangements.

And that time is needed because the chance of sorting this all out by March of next year is zero.