Care to dance? Colm Keena on an evolutionary quickstep 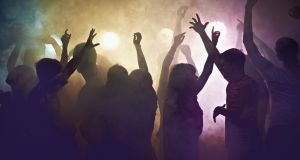 “I’d wonder why I found what I was doing so satisfying. What was the evolutionary purpose of dancing?” Photograph: Getty Images

In my early-to-middle, middle years, I loved to dance. Freeform, slightly inebriated dancing, to popular tunes by such inspired marvels as Talking Heads, Bob Marley, the Clash, the Waterboys, the Blades, and the superabundantly talented Prince.

In the 1980s there was a nightclub called Risk on Anne’s Lane, off South Anne’s Street, Dublin, on the dance floor of which I spent many sweaty hours moving with others to the music played by its excellent DJ.

After it closed I moved my attention to Suesey Street, a basement nightclub on Leeson Street where, if memory serves, the DJ multitasked behind the small bar, switching records while also serving wine or champagne, but not beer.

Not all nights were the same but a good night of unrestrained dancing was about as good as it got, in my opinion, when it came to seeking a justification for existence. I have these swirling memories of dancing with friends and strangers, and exchanging knowing smiles as we reached aerobic thresholds that my internal cardiac nurse might now consider ill-advised.

For most of the Nineties I lived with two flat-mates on the top of a Georgian house on Ormond Quay, and I sometimes found myself strolling home from Suesey Street in the early mornings, the sun up but most of the city still asleep, disturbing the pigeons as I made my way down an otherwise empty Grafton Street, satiated, though never exactly sure with what.

I’d studied science in college and had read about how our emotions evolved in the hunter-gatherer societies from which we all come: how they are designed to allow us manage the complexities involved in collectively gathering food for later group consumption, while our individual genes were, at the same time, being selected for those that best predicted their survival.

Sometimes, twisting and turning on the dancefloor to, say, Peter Gabriel’s Sledgehammer, or Donna Summer’s I Feel Love, I’d wonder why I found what I was doing so satisfying. What was the evolutionary purpose of dancing? Where had you gone when you’d been on the dancefloor for hours, and still didn’t want the night to end?

The obvious answer, of course, was courtship. Dancing lets you show your stuff to others, and lets others show their stuff to you.

It must be life’s most cheering form of flirtation by a long road.

And it usually occurs at night, when what Tom Waits referred to as those old tomcat feelings, are most on the prowl.

But somewhere deep down in my zinging nerve-ends, I thought there must be something else to it too.

These days I never find myself grooving my way through to the dawn. Rather my encounters with an elevated heartbeat tend to come in the mornings, after I’ve woken from a good night’s sleep, and gone for a solitary run in my nearby park. (Mostly I run listening to songs that the DJs from Risk and Suesey Street would have recognised.)

Because of my latterly developed interest in exercise, I chanced to buy a book on the subject recently when browsing in Hodges Figgis on Dawson Street. Exercised is not just about why we should exercise, and why we usually don’t feel inclined to do so, but also the evolutionary reasons for this. Its author, Daniel Lieberman, is a paleoanthropologist, and a professor in the department of human evolutionary biology, at Harvard University, in Massachusetts.

It is a highly readable and fascinating book, and I was particularly delighted when I came upon this sentence: “I know of no non-industrial culture in which men and women didn’t dance for hours on a regular basis.”

Turns out that up until five minutes ago, in evolutionary terms, long, regular, all-night dancing sessions were the norm, everywhere, for everyone. Even though calories were, back then, scarce commodities not to be wasted, the genetic inclination towards an extended bop was selected for, because dancing bolstered the endurance needed for the occasional long runs hunters engaged in, when they caught their prey not by pouncing upon them, but by chasing after them for hours, and simply wearing them down.

And just like extended running, Lieberman added, dancing can induce altered states, and heightened sense perception, capabilities that were useful during the fag-end of a hunt that involved hours and hours of pursuit.

So it turns out that the pleasure I got from my nights of dancing in a smoke-filled basement on Leeson Street is a close relative, in evolutionary terms, to the satisfaction I now get from my morning runs in a green and pleasant suburban park. And that, maybe, explains why the soundtrack that once graced one, now graces the other.