Excessive gambling rather than alcohol consumption is the real danger 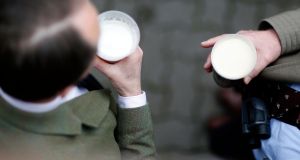 The Cheltenham Festival is Disneyland for alcoholics. Truly heroic feats of drinking take place over the four days; so much so that the festival has always boasted of its prowess. In a press release last year, The Jockey Club noted admiringly that 265,000 pints of Guinness, 120,000 bottles of wine and 20,000 bottles of champagne were the impressive amounts consumed during the 96 hours of the festival.

The champagne corks are popping and pints are back at this year’s festival, but a pious Victorian morality has crept in. There will be no publicising of this year’s alcohol figures, racegoers are being implored to “drink responsibly”, there is a four drink per order limit at the bars and – in quite an extravagant gesture – “free bottles of water will be available at the end of the day to those exiting the course”.

There will also be “water points” available at every bar, just like the way they have “water points” for marathon runners. The word tap might have been more suitable here.

These new, and deeply unpopular, strictures have nothing to do with alcohol awareness per se; nor are they designed to impact on alcohol sales at the festival. They have been put in place following a PR blowback at last year’s festival when two footballers were pictured urinating into a pint glass – the contents of which were poured on to racegoers below their balcony. In a separate incident, two female reality TV stars bared their breasts.

In terms of event prestige, Cheltenham is up there with Glastonbury. It’s a wonderful joyous occasion in which the actual activity you’re there for can seem to take second place to the sense of communal affability.

More than 260,000 visitors visit the Cheltenham Festival over the four days and the event is worth millions. There is a huge amount of interest in and engagement with the festival from far and wide.

But last year’s optics weren’t good. The isolated actions of two footballers and two reality TV stars (and the bountiful coverage given to their antics) were damaging the brand. Hence this year’s piety about alcohol and press releases informing us that you can only order four drinks at a time (before bringing them to your table and going back to order another four) and that salvation can be had from picking up your free bottle of water on the way out.

The clueless insanity informing these measures is no surprise once you read the small print and discover that Drinkaware has a partnership with the Racecourse Association to promote its “Pace Yourself” campaign”. The Drinkaware group, both in the UK and Ireland, is funded by the alcohol industry. Its campaign goal is for people to “drink responsibly” – as in, oil the wheels of Big Drink but don’t be doing anything that shows alcohol consumption in a bad light.

Drinkaware may talk a lot of (albeit blindingly obvious) good sense about alcohol awareness, but the bottom line is that, being industry funded, it has a vested interested in keeping people drinking. Not drinking to the extent where you urinate into a beer glass and throw it over people, but anywhere below that level would be just fine.

You could put up the argument that if there is a problem with alcohol at the festival, calling in a group which is funded by the alcohol industry to offer advice might be not be the most salubrious of solutions.

As for the injunction to “pace yourself” – it’s the Cheltenham Festival; people lap themselves in their drinking.

There’s another activity at the Cheltenham Festival that, like the drinking, sometimes gets out of hand. Punters this year may be being advised to drink sensibly, but they are also being encouraged to gamble irresponsibly.

Gambling companies are engaged in a frenzied round of heavily promoted “special offers” – including free bets – and undercutting rivals by offering more favourable odds to maximise business. The chief executive of Paddy Power, Breon Corcoran, told the Financial Times that Cheltenham is “an opportunity to reactivate our old customers and bring in some new customers”.

Just as we evolved in our thinking that tobacco and alcohol weren’t in fact good for you and were addictive substances that needed regulating, so we have belatedly acknowledged that problem gambling is not just an impulse disorder but a full-blown addiction with all the wretched bells and whistles.

In their manual of mental disorders, the American Psychiatric Association had problem gambling classified alongside compulsive hair-pulling until 2013; it has now been upgraded to full addiction status – the same as alcoholism.

As with the drink industry, advice and information on “gambling responsibly” is funded by the gambling industry itself. It appears to take the form of: gamble away please, so we can increase our year-on-year profits, but don’t be losing your house, job and family over it as that looks bad for us when it hits the papers.

We know that problem gambling is as ruinous to our well-being as problem drinking. At Cheltenham they are trying to keep a lid on the drinking while enthusiastically promoting gambling. It’s an Orwellian doublethink.

The free bottle of water available to Cheltenham punters may make a modest contribution to their sobriety, but tomorrow many will still be broke – or in debt.