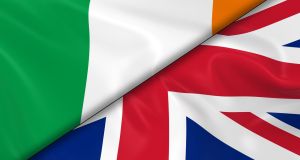 ‘People living in Northern Ireland have no desire to go back to the days when two people born on the same street grow up with two different sets of rights.’ File photograph: Getty Images/iStockphoto

Brexit has taken up an extraordinary amount of media time and space since the United Kingdom made its decision to withdraw from the European Union in 2016. Yet few would have anticipated the current focus on the 1998 Belfast or Good Friday Agreement, which has sustained the peace that we have enjoyed on this island for the past 20 years.

Fewer still would have suspected that the biggest threat to that historic settlement would be a unilateral withdrawal of the United Kingdom from the European Union.

Time is running out on solutions to avoid a hard exit from the human rights and equality architecture that has underpinned Ireland-UK relations for decades. This is not an academic complaint: that architecture is what supports the everyday choices of people living on both sides of the Border, who regularly travel back and forth to access healthcare, work, childcare and education.

Nor is it academic for people living in Northern Ireland, who have no desire to go back to the days when two people born on the same street grow up with two different sets of rights.

This is what is at stake when we argue that the North-South equivalence of rights must be safeguarded after Brexit, and enforceable in the final Withdrawal Agreement.

Progress towards a lasting resolution of the conflict in Northern Ireland has been grounded in the human rights and equality provisions of the Good Friday Agreement, which itself was rooted in the assumption that both the UK and Ireland would continue to be members of the EU.

Although the Joint Report of December 2017 committed to protecting the 1998 Agreement “in all its parts”, Brexit negotiations currently depart from that common framework, which creates significant risks for both rights and remedies.

As European Commission president Jean-Claude Juncker said in his address to the Oireachtas last week: “The Good Friday Agreement should be preserved in its entirety. Every line, every letter.”

The Joint Committee, a body of representatives of the Irish Human Rights and Equality Commission and the Northern Ireland Human Rights Commission set up by the Agreement, has recommended a clear and enforceable commitment to no diminution of human rights and equality standards post-Brexit. Retaining the EU Charter of Fundamental Rights is one way of achieving this.

The right to live, work or travel in the EU needs to be extended to all the people of Northern Ireland

Although the British government has made many promises not to reduce human rights and equality standards after withdrawal, the question of what happens following the final exit day remains a significant concern to us. It is unclear how people will be able to vindicate those rights if the Court of Justice of the European Union is not an option any more.

Given that the Bill of Rights for Northern Ireland envisaged in the 1998 Agreement has still not come to pass, at the very least Northern Ireland needs to remain within the EU human rights and equality legislative framework, or maintain an equivalence with those standards on an evolving basis. Otherwise, there is a real fear that Northern Ireland will fall behind not only Ireland and the EU, but also the UK.

Northern Ireland has a particular status within the United Kingdom as a place that is home to multiple identities. The 1998 Agreement recognises “the birthright of all the people of Northern Ireland to identify themselves and be accepted as Irish or British, or both, as they may so choose”.

While we have welcomed the careful consideration given to avoiding a hard Border at all costs, we remain focused on protecting rights and equality in a way that goes beyond existing Common Travel Area arrangements. The Common Travel Area does not answer questions about the right to cross the Border for essential healthcare, or education, or employment. The EU’s work and investment to address disadvantage and community division in Northern Ireland, particularly in Border areas, stands to be undermined by potential restrictions on the freedom to move, work or access services.

Along with my fellow Chief Commissioner in Northern Ireland, Les Allamby, I have met Mr Barnier and his task force, with Permanent Missions in Brussels and, just last week, with the minister and officials of DExEU in Westminster, the UK Department for Exiting the European Union. In these meetings we have continually and explicitly raised our concerns about the human rights and equality implications of Brexit for the island of Ireland.

While we welcome the proposed “dedicated mechanism” to oversee human rights and equality in a post-Brexit landscape, we must ensure that any such mechanism is not seen as a substitute for effective judicial-based remedies which provide proper redress. We are ever mindful of the precarious political situation in Northern Ireland. The imperative for spelling out precisely how rights will be protected remains key to the negotiations at this time.