Breda O’Brien: The amazing hypocrisy of the pro-abortion lobby

A ‘rogue clinic’ has been accused of deceiving women, but pro-choice clinics tell lies too 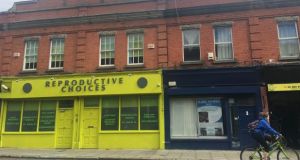 The Women’s Clinic (in building on right) on Berkeley Street in Dublin, is next door to Reproductive Choices, a pregnancy advisory clinic closely aligned to the Marie Stopes organisation in the UK. The clinics are unrelated. Photograph: Ronan McGreevy/The Irish Times

The hypocrisy of our politicians and opinion-formers over abortion is stunning. Take the latest controversy about the Women’s Centre on Berkeley Street in Dublin – a so-called rogue abortion clinic – claiming to provide accurate information, but in fact manipulating women to prevent them choosing abortion.

Deceiving women and giving them inaccurate information is wrong, for the old-fashioned reason that lying is wrong. Such clinics should not exist. But there is never the same outcry about clinics that are ideologically pro-choice when they transgress.

A couple of years ago, Gemma O’Doherty, one of Ireland’s most courageous and tenacious journalists, broke a story about allegations that Irish Family Planning Association crisis pregnancy counsellors were advising clients to break the law. She heard and viewed tapes of counsellors (procured in a sting operation) advising people how to import the so-called abortion pill via Northern Ireland. The IFPA did not question the veracity of the tapes.

The IFPA was also advising women to say that they had had a miscarriage, not a termination, if they had post-abortion complications. In rare cases, the womb can be perforated during an abortion. Failure to declare a recent termination could mean doctors would not look for this potentially fatal complication. At the time, Dr Sam Coulter-Smith, then master of Dublin’s Rotunda maternity hospital, said he was aware of cases where women had died in exactly these circumstances.

The IFPA’s crisis pregnancy counselling agency is HSE-funded. It advocated law-breaking and its advice was dangerous to women’s health. Remember the gigantic outcry about the IFPA, the ministers calling for heads on plates, the relentless media coverage? No, me neither.

Any story that questions any of the actions of a pro-choice agency will die a very premature death, while any story featuring the nefarious actions of pro-lifers will be discussed ad infinitum.

The double standards don’t stop there. The IFPA counsellor was very critical of Marie Stopes – an organisation which runs health clinics providing abortions. “Now there is one clinic that I would not advise you to go to . . . is Marie Stopes. Don’t go near them, okay? So I am not saying they are dirty or anything but we’ve got a lot of complaints about them, okay? I don’t send anyone there, and I wouldn’t. So if Abortion Support Network suggest Marie Stopes, say no.”

No problem. But when The Women’s Clinic – the agency currently in the spotlight, a pro-life one, said something about unclean clinics, shock and horror ensued, particularly as it is right next door to Reproductive Choices, which is affiliated with Marie Stopes Clinics.

Yet last month, the UK’s Care Quality Commission (CQC) announced that Marie Stopes International was suspending termination of pregnancy provision for under-18s and vulnerable groups of women, surgical terminations carried out under general anaesthetic or conscious sedation, and all surgical terminations at their Norwich centre. One can only imagine what led to those suspensions. All we know is that the concerns relate to “consent and safeguarding and the lack of assurance in relation to training and competence in conscious sedation and general anaesthesia.”

So was Marie Stopes carrying out abortions without appropriate consent on women under 18, and vulnerable women? And without properly qualified people to carry out sedation and general anaesthesia? Remember the media storm about that one? Nope. Me neither.

One of the charges against this alleged rogue clinic currently in the news is that it claimed that babies are occasionally born alive after late terminations, but the reporter dismissed this, saying that steps are taken to prevent live births.

Funny enough, she did not describe the “steps”. The procedure is called feticide, which of course comes from the Latin root occido, meaning “to fell or to kill”, the same root as the words homicide, suicide and genocide. It means killing a foetus, usually by a lethal injection(the Royal College of Obstetricians & Gynaecologists’ term, not mine). Using ultrasound, a lethal substance such as potassium chloride or digoxin is injected directly into the baby’s heart.

To someone fully committed to the right to choose, neither an abortion on the grounds of cleft palate nor a lethal injection for a foetus is immoral, much less a spur to debate abortion. Any woman who wants an abortion should have one.

But a “rogue” pregnancy counselling agency should be pursued and pulverised. Unless, of course, it happens to be an agency that shares your ideology, and then entirely different rules apply.