Breda O’Brien: Americans singled out by pope have one thing in common 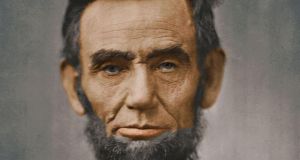 There are clues to Pope Francis and what he values in the choices he made when he highlighted four Americans in his address to Congress: Abraham Lincoln, Martin Luther King, Dorothy Day and Thomas Merton – two non-Catholics and two Catholics.

None of them were plaster saints. All had strong personalities and great flaws, but all shared an intense consciousness of the centrality of God in their lives.

Abraham Lincoln grew up in an extremely poor farming family, who had little in the way of formal education but did have the Bible. The cadences and rhythm of the Bible are to be heard in many of Lincoln’s greatest speeches.

But he was not conventionally religious, at least not in the sense of being a card-carrying evangelical. Unlike modern American presidents, he was also not willing to see God’s will as identical with American interests, or able to believe that waging war automatically brought God’s approval.

As he wrote: “In great contests each party claims to act in accordance with the will of God. Both may be, and one must be, wrong.”

While Lincoln went to war, and Francis’s great hope is to bring an end to war, both share a kind of practical integrity, a willingness to do what is right, no matter what the demands it places on you.

Martin Luther King is revered as a kind of secular saint nowadays, but he was not secular, and probably not a saint. He was a Baptist minister who was also steeped in the Bible, and his belief in the fundamental equality of all human beings came from his Christianity.

No doubt Francis was endorsing King’s immense personal courage and faith, but not his troubling history of infidelity to his wife, Coretta.

Francis has a great understanding of the reality of family life, speaking about it in a down to earth way that is unusual for a high ranking clergyman, much less a pope. He also has a keen awareness of how often people fail, and how important it is to keep extending mercy to them, without watering down essential teachings.

It is a tough balancing act, one also faced by those gathering for the Synod on the Family in the near future.

Dorothy Day was also a complex character, but more likely to have been a saint. The American bishops have endorsed presenting her case for canonisation, which makes a change from the attitude some bishops in her own time had to her.

For example, she came into head-on conflict with Cardinal Spellman of New York because she supported gravediggers when they went on strike for better conditions, while he broke the strike by getting seminarians to dig the graves.

However, she took no pleasure in opposing any high-ranking member of the church, but felt that she could not in conscience fail to highlight the church’s flaws.

She had an abortion, which she regarded as one of the greatest tragedies of her life. She thought that she would not be able to have children, so when her daughter was born, she had her baptised, an event that led to the end of her common-law marriage.

She remained celibate from then on, dedicating her life to radical Christian activism. She and the Catholic Worker movement that she co-founded reflect many of the ideals that animate Francis. She lived a life of poverty and hospitality to the poor, founding many houses where volunteers live side by side with addicts, alcoholics and the homeless.

She embraced the rights of migrants and of poorly paid workers. She was willing to be jailed for opposing war and nuclear weapons. Yet she also prayed the rosary every day and received daily Communion.

Thomas Merton, a Trappist monk, was a mystic and, like Day, a staunch pacifist. Merton was both rooted and restless. He entered into inter-faith dialogue with the Dalai Lama and other Buddhists, and while remaining rooted in Christianity, was open to learning from other traditions.

Similarly, Pope Francis has had a long friendship with Rabbi Abraham Skorka of Buenos Aires and on his tour’s last day, blessed a sculpture representing mutual respect between Jews and Christians. With him was Rabbi Skorka.

Like the four he chose to highlight, Francis defies easy categorisation. All that is certain is that like the Americans he mentioned, he believes the love of God is for everyone, and that it is his job to try and open people’s hearts to that.