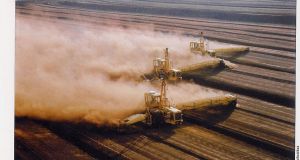 Last week, Ireland became the second country in the world, after the UK, to declare a climate and biodiversity emergency. It followed a UN report on climate change that made for grim reading. The report, commissioned on the back of the 2015 Paris Agreement warned that global warming caused by humans is speeding up as opposed to slowing down.

It is the latest in a series of stark warnings that tell us that climate action is no longer a choice, but a very basic necessity for survival.

The declaration came after an amendment to the Oireachtas report on Climate Action was accepted by both the Government and Opposition parties without a vote. This is welcome news. But what must be done to make a difference in fighting or even mitigating the effects of climate change?

Effective climate action will require much stronger participatory democracy, where local people are actively informed and engaged in decision-making about their own communities and their own futures

On the bright side, it does seem that the reality of climate change is being heard by voters. Recent global activism, like Extinction Rebellion and the student strikes, and policy initiatives like the Green New Deal, as well as consumer demand for products friendly to the environment demonstrate greater public support for climate action and increasing desire to see results. This should bolster governments to adopt radical and effective policy programmes.

A carbon tax is perhaps the most straightforward initiative, as its purpose is to reduce the reliance on fossil fuels and likewise, increase use of renewable energy sources. However, carbon taxes are a blunt instrument and do not deal directly with more complex dimensions of climate action, in particular the transformations required in livelihoods and lifestyles.

The real challenge of climate action for the Government will thus be to link these blunt and punitive measures, like a tax or redundancies, with more constructive avenues towards a different future, where climate action is the norm and targets regarding emissions and protection of biodiversity are societal, policy and political priorities.

To succeed, climate action will have to be developed from the ground up as well as through national policies and international agreements. Effective climate action will require much stronger participatory democracy, where local people are actively informed and engaged in decision-making about their own communities and their own futures. People have to believe their input matters and, importantly, they must be able to trust governments and businesses to act in the public interest.

Local wealth building has become increasingly prominent as an approach to regenerating the local economy in post-industrial northern cities in the UK, notably Preston, and in the US, most famously Cleveland. The model uses government procurement contracts as a source of capital for local enterprises, favouring in particular social enterprises, co-operatives, and businesses that pay the living wage.

The expenditures of large public institutions like hospitals, universities, and government agencies become catalysts for local economic growth, rather than boosting the profits of national or multinational companies.

Instead of public institutions, regenerating rural areas would draw on a combination of Government, business, and trusts and foundations dedicated to climate change to promote rural areas and communities as attractive places to live and work.

Other sectors can also benefit from public and private contracts including renewable energy, food production, and sustainable construction.

Rural and community regeneration is an essential element of what it will take to ensure that last week’s declaration of climate emergency becomes actionable and that Ireland can make a just transition to the low-carbon society we must become.

A just transition takes into account the needs of workers, communities and consumers, and above all, ensures that measures taken do not have a punitive impact on any one group, like the farming community, or disadvantaged communities.

Climate change affects every person in Ireland. It will change the way we live, work, travel, shop, eat and socialise. Planning for it, and making the changes that are necessary to reduce our greenhouse gas emissions, while maintaining vibrant rural and urban communities, is all of our responsibility.

To have an impact, climate action must, therefore, have both bold political leadership and respect for democratic participation.

Dr Shana Cohen is director of TASC, the Think Tank for Action on Social Change. TASC, in partnership with the Foundation for European Progressive Studies, is exploring the viability of adapting what is known as the local wealth building model to rural and coastal areas in Ireland