In the US, women’s right to choose is under threat as anti-abortion groups gain power 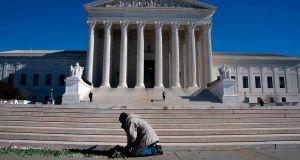 Carnations left in front of the Supreme Court in Washington, DC, representing the approximately 3,000 abortions carried out in the US every day. Anti-abortion groups have targeted the landmark Roe v Wade decision of 46 years ago. Photograph: Jim Watson/AFP/Getty Images

Last week in New York, I participated in a conference on reproductive rights sponsored by the New York Women’s Foundation, and organised with the Queens College Irish Studies programme and the Graduate Center, the City University of New York. The conference was the beginning of a new era of dialogue and solidarity between people in Ireland and America, and the dramatically shifting landscapes of reproductive rights in both places. Where Ireland is bringing an optimism and a rare victory in reproductive healthcare, our peers in the United States are in the midst of a battle to hold on to the right to choose.

In Georgia last week, a Bill was signed by the governor to ban abortions where a doctor can detect “a foetal heartbeat in the womb”, which is usually when a woman is around six weeks pregnant, a stage when the woman often does not know she is yet pregnant. Similar so-called “heartbeat” laws have also been passed in Ohio and Mississippi, but are not in effect in practice. In Alabama, meanwhile, their senate will vote this week on banning abortions once a foetus is in utero, basically a complete abortion ban.

These Bills will be fought. Tabling them is about testing the parameters of where American society stands or could stand on abortion. It’s also a combination of reconnaissance and test shots at Roe v Wade. While many reproductive rights scholars and activists believe that Roe v Wade being dismantled is an inevitability, anti-abortion, anti-feminism and anti-women’s-healthcare actors know that there are multiple different ways to journey towards that ultimate goal.

But going straight for Roe also poses its own tactical difficulties. An all-out attack on Roe would certainly create a confluence of protest, resistance and awareness-raising by pro-choice people. Directly threatening Roe right now could backfire. It is harder to rally the pro-choice troops around more complex, disparate and regional goings-on. In that respect, chipping away at reproductive rights is proving to be a relatively successful tactic for anti-choice politicians, lobbyists and campaigners.

You can have the most copper-fastened abortion laws around, but what matters is access. Finding inventive ways to restrict women’s access to reproductive healthcare is about anti-abortion forces using the tactic: where it’s legal, make it hard. Many women in the US have experienced a similar process to women in Ireland pre- repeal: having to travel to access abortion. In Mississippi, for example, with a population of three million people, there is just one legal abortion clinic in the entire state. The same problems Ireland experienced apply: it is always the most marginalised and vulnerable who suffer the most when healthcare access is restricted. Those with means can at least get around the obstacles.

Restricting abortion access is not about being so-called “pro-life”. Most of the states we’re talking about when we’re talking about restricting abortion access seem perfectly fine with having the death penalty. It’s also not about children’s rights. If it was, then the conversation around child marriage in Alabama, for example, would yield better protections for girls. It’s certainly not about women’s rights, in a country where millions flocked to vote for a man who bragged about sexually assaulting women. This is not even about stopping or preventing abortion. We all know that restricting access just makes abortions less safe and puts women who need abortions under more stress. So what is it about?

Everything comes back to race in America, that is true. But everything also comes back to white American cruelty. Every nation has its legacy, and America has never addressed its one, allowing a cycle of abuse and cruelty to continue. It has never properly confronted its foundations on the genocide of indigenous people nor its economic success built on the horrors of slavery. Now that it’s no longer permissible, white America has found a multitude of ways to inflict cruelty where it can, from mass incarceration to denying people healthcare to favouring gun rights over human rights. White fragility matched with white supremacy has constructed an architecture of cruelty to maintain dominance, oppress others, and torture those who seek to unseat the racist patriarchal structures of American society. That’s what this is about. It’s about a country that talks in feelings, not facts, yet won’t process its own propensity for cruelty and emerge with empathy, like a patient resistant to therapy because opening up means acknowledging all the terrible things perpetrated in the past.

In Ireland, this American playbook will be referenced by our own fundamentalist crew of anti-abortion obsessives

So much of what we see with anti-abortion movements – in which religious fundamentalism, fake news, propaganda and hysteria are embedded – comes from the American playbook, so it behoves us to keep a close eye on what’s happening in the US right now. None of these things are actually to do with any kind of regard for life. If America was “pro-life”, then it would not legally execute people in prisons, go to war on a whim, let police get away with shooting people dead in the street, tolerate the mass murder of children in schools, deny people basic healthcare, and all the rest. In Ireland, this American playbook will be referenced by our own fundamentalist crew of anti-abortion obsessives, who believe themselves to be doing God’s work in media, politics, churches and on the streets. Meanwhile, we need to stand together wherever a woman’s right to choose is threatened.