Collusion of ‘decent men’ is a big part of the problem

Donald Trump has apologised for lewd comments he made when he boasted about trying to have sex with an unidentified married woman and groping women, saying "when you're a star, they let you do it." Video: REUTERS/ WASHINGTON POST 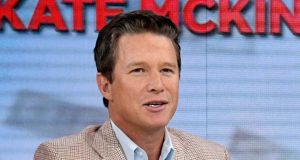 Co-presenter Billy Bush on the “Today” show in New York. On Monday NBC suspended him from the show over his behaviour during his conversation with Trump in 2005. Photograph: Peter Kramer/NBC via AP

Forget the buffoon. Billy Bush is the name to conjure with now. The laughing wingman to Trump’s grope ’n’ grab ‘em by the vagina show. The one who whines that he “acted foolishly in playing along” but that he was “younger, less mature...” So young. Just 33. How was he supposed to resist the hilariously criminal urges of the 60-year-old celebrity he was just escorting to a studio?

Billy, of course, did not just “play along”. He was much more involved than that. Watch the video and listen to Donald tell Billy how he doesn’t wait when he meets women, how he just grabs them by the pu--y and starts kissing them because it’s his right as a celebrity.

Then follow their joint gaze as it locks on to Arianne Zucker. Mmmmm...fresh meat. “It looks good, nice legs huh?” says Trump. See Billy encourage Zucker to get close enough to smell Trump’s breath – “How about a little hug for the Donald?”

What role did Billy think he was playing just then.

Billy the Great Facilitator? That would be the Billy who will push any woman into the hands of a brute who has just openly admitted to regular sexual assaults. Billy the Accomplice? The Billy happy to get a piece of the action. Billy the Colluder? The Billy who laughs like an idiot and remains silent out of cowardice or self-interest.

But when the lads on the lash start cat-calling a lone woman on a dark street, or tell her to get her tits out, what’s a guy to do only “play along”? It’s just banter. Locker-room talk.

Like the English fans in Marseille during Euro 2016, captured by Channel 4 undercover cameras having the bants with small street children: “Five euro – drink my pee.”

The bully’s minimal grasp of empathy, wit, language and civil discourse will always see him go low and grab at what he wants. Watch Trump’s body language in Sunday’s debate, looming up behind Hillary Clinton and invading her space.

Nigel Farage, who likened him admiringly to “a big silverback gorilla, prowling the studio”, loved it. To others it depicted a witless bully.

So are people genuinely shocked at the tape revelations?

Well, it’s only five years since Sky Sports presenters Andy Gray and Richard Keys, two more gorillas who thought they were off mic, asked a footballer if he had “smashed it” – “it” being a woman – and clips emerged of Gray asking his female co-presenter to tuck his microphone down his trousers.

“It’s nothing more than you hear in any locker-room,” wailed the defence. His “gutter-talk” was something “all men do, at least all normal men”, said Carl Paladino, his New York state co-chairman.

Farage shrugged it off as “alpha-male boasting”, meaning “alpha males” regard sexual assault as something to boast about, presumably.

In any event, Republican senator Jeff Sessions said he wouldn’t characterise Trump’s admissions as amounting to sexual assault, which prompts one to wonder about his thoughts when his penis is grabbed by a very large person.

Lest there was anyone left on earth who imagined that Trump’s brand of courtship was unique, Kellyanne Conway, his campaign manager, put them right, aiming her guns at US Congress members suddenly “on their high horse” about the orange one’s behaviour .

“I would talk to some of the members of Congress [who were] there when I was younger and prettier...them rubbing against girls, sticking their tongues down women’s throats who were uninvited...You know it’s true.”

It could be interpreted as a warning to back off. If Kellyanne is to be believed, those sexual assailants are still there, throwing up their hands in horror at the Trump tapes.

And still being shielded by the likes of Kellyanne. And Billy.

Trump may be history, but his attitudes are not. By Billy’s silence he has allowed a monster to grow and prosper. He has facilitated and normalised the public humiliation of able, successful women such as Carly Fiorina and Heidi Cruz and many others.

And those tapes are just the beginning according to the producer on early seasons of The Apprentice in the US, who tweeted on Sunday that there is “far worse” to come.

More banter, probably. Locker-room talk. Alpha-male boasting. Not outright rape. Sure what harm can it do?

1 Normal People Class of 2020: The nine college friends in the series
2 We need to pay very close attention to what is happening in Britain now
3 Connell losing touch with club championship is real tragedy of Normal People
4 Seven great Irish escapes to rent when lockdown lifts
5 Protestors clash with police in Atlanta as demonstrations erupt for second night
Real news has value SUBSCRIBE