Austerity in coming years less harsh due to debt deal 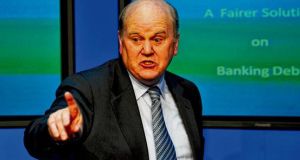 A book-length treatment would be required to provide a full analysis of the complex transactions which occurred this week and that resulted in the liquidation of the Irish Bank Resolution Corporation (IBRC), expansion of Nama, and effective replacement of promissory notes lodged at the Central Bank with long-maturity sovereign bonds.

An important outcome is that the Irish fiscal position has substantially improved thanks to lower debt servicing costs, a reduction in the scale of market funding required and the pushing out of the maturity dates on these bonds to the far-distant future.

Part of the fiscal gain stems from the commitment from the Central Bank to hold a substantial proportion of the freshly-issued sovereign bonds for a sustained period (unless the financial environment sufficiently improves to enable it to sell the bonds on an accelerated schedule).

Since the Government is the shareholder in the Central Bank, the net income from these bond holdings (the difference between the interest rate on the bonds and the cheaper rate that the Central Bank pays on its euro system liabilities) is returned to the Minister for Finance.

This should not be viewed as outside the remit of the Central Bank, since it is the byproduct of the original intervention to provide emergency liquidity (against collateral) to Anglo and Irish Nationwide.

Occasionally, troubled banks cannot be saved and must be closed. If a bank is liquidated and cannot repay its debt, the Central Bank acquires the associated collateral. This happened here this week with the liquidation of the IBRC; in 2008, the ECB seized collateral when the German affiliate of Lehmans and the Icelandic banks failed.

While the net income from ECB-level liquidity operations (and the proceeds of the collateral seized in the event of bank failure) are shared across the system, the net income from the exceptional liquidity assistance (ELA) extended by national central banks (with the approval of the ECB) accrues to the local shareholders.

In the IBRC case, the main collateral was the promissory note.

Under the deal, this has been exchanged for a set of sovereign bonds with the same face value. Although the associated payment schedule to the Central Bank is prolonged relative to the promissory notes, the market tradability of the bonds is a valuable attribute, so that the instrument exchange is a “win-win” with gains to the Central Bank and the Government.

An additional gain is that the deal enhances the stability of the Irish financial system and the Irish fiscal position by eliminating the dependence on ELA, which was subject to review by the ECB on a fortnightly basis.

The rules of this facility are that losses have to be made good by the national government, so that non-payment of the promissory notes would simply have increased the effective level of Irish sovereign debt by the same amount.

Given this sequence, any attempt by the Government to unilaterally reduce the face value of the debt would have been interpreted as a type of sovereign default. Furthermore, it is implausible that the reputational impact of an attempt at a selective non-payment on the liabilities owed to the euro system could have been contained, in terms of relations between Ireland and other European governments and the risk-averse element of the investor base for sovereign debt.

The ability of the pillar Irish banks to use Irish sovereign debt (or Irish government guarantees) to avail of cheap euro system funding would also have been severely impaired under this alternative scenario, since the credibility of the ECB in preserving payment discipline across the euro system would require it to tighten eligibility criteria and collateral rules in relation to Irish sovereign instruments.

For these reasons, any decision to renege on the promissory notes could only have been in the context of a wider decision to seek sovereign debt restructuring, which would be a radical break from the current economic strategy. (The wider debate on sovereign debt sustainability will doubtless continue to run.)

What are the implications for Ireland’s fiscal strategy? The analytical framework that underpins the fiscal treaty would indicate that the target primary (non-interest) structural surplus Ireland needs to achieve in the medium term is lower. In turn, this more attainable target means that the scale of required austerity in the coming years is appreciably less than was required before this week’s deal.

However, there remains a considerable fiscal gap to be closed before this target is achieved. Accordingly, while it may be politically tempting to slow down the pace of fiscal adjustment in order to deliver a short-term dividend from the deal in terms of easier budgets in 2014 and 2015, this would be a risky strategy for several reasons.

First, the international growth pessimism debate speculates that the next few years will reveal that the medium-term output growth trend (at home and overseas) may be lower than projected, which implies a tougher fiscal future.

Second, even if not envisaged under central scenarios, the playing out of our household debt crisis may ultimately require extra capital injections into the Irish pillar banks, which would negatively alter Ireland’s fiscal profile.

Third, there are multiple scenarios by which the international sovereign debt crisis reignites, leading to higher funding costs. All told, these downside fiscal risks would be easier to handle if the fiscal deficit is closed more quickly.

Furthermore, given that substantial adjustment is still required, delaying the spending cuts and increases in revenue prolongs fiscal uncertainty. This adjustment overhang delays private-sector recovery, since households and businesses cannot make firm plans if the individual elements in the required fiscal adjustment remain unspecified. It also runs the risk of fiscal fatigue on the part of politicians and the electorate, since implementing spending cuts and revenue hikes is progressively more difficult as the date of the next general election draws closer.

This Government faces many severe economic challenges (fiscal adjustment, public sector reform, household debt restructuring), while the full recognition of the special nature of Ireland’s bank-related debts requires further major steps at the European level. At the same time, this remarkable (if limited) deal should not be under valued. It is a major achievement for the Government and the policy officials who designed and delivered it.