Anti-Catholic bigotry of many in DUP still significant 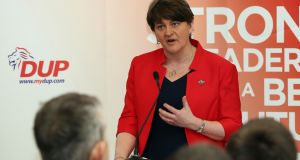 “It is disappointing that the deep and overlapping anti-Irish and anti-Catholic bigotry of so many DUP-supporting unionists appears to still play a significant role in Northern life and politics.” Above, DUP leader Arlene Foster. Photograph: Paul Faith/AFP/Getty Images

How much did continuing religious bigotry have to do with the collapse of the Northern Ireland Executive last month? It was clear from Martin McGuinness’s resignation statement that the row which led to that collapse was not only – or even mainly – about the Renewable Heat Initiative fiasco.

McGuinness accused First Minister Arlene Foster of “deep-seated arrogance” and the DUP of rejecting his attempts to reach out to unionists, of “shameful disrespect” to women, gay people and ethnic minorities, and “crude and crass bigotry” to Irish language speakers.

In a follow-up RTÉ interview, McGuinness said there were many people in the DUP who “hate anything to do with Irish nationalism and Irish republicanism.”

As somebody who began studying the DUP more than 30 years ago (in the course of researching a biography of the late Ian Paisley), I recognise the truth in all these charges. I had hoped that their antiquated prejudices would have begun to diminish as a realisation that they had to share their divided little society with their nationalist neighbours started to dawn on unionists in a new century.

It is disappointing that the deep and overlapping anti-Irish and anti-Catholic bigotry of so many DUP-supporting unionists appears to still play a significant role in Northern life and politics.

Back in 1986, I wrote about the people who followed Paisley as follows: “They believed they were inherently superior to their Roman Catholic neighbours because of their religion. They were ‘born again’ Christians, living in the ‘light’ of pure Protestantism, free men who communed with God without the interference of priests or man-made rituals. Catholics, on the other hand, were benighted and ignorant souls who were enslaved by the ‘darkness’ of Roman superstition, the idolatry of the Mass, and the rule of the papal anti-christ.

“Such a view tallied perfectly with the superiority they felt anyway as the descendants of the people who had ‘civilised’ Ulster. Thus the underprivileged position of Northern Catholics was nothing to do with injustice: quite the opposite – it was living proof of God’s justice in rewarding those who followed the true religion.”

I wonder how many Northern unionists of the DUP persuasion still hold such appalling, near-racist views. Too many, I suspect, although friends tell me that such bigotry is far less prevalent among younger DUP members (and I have at least one young DUP councillor acquaintance who bears that out).

A politically-minded Belfast Protestant minister told me recently that about a third of DUP Assembly members were old-fashioned conservative evangelicals – some might call them fundamentalists – who continue to oppose Roman Catholicism as non-Christian, and to look down on its followers.

This kind of anti-Catholic Protestantism also remains a significant factor in the North’s largest Protestant denomination, the Presbyterian Church. Its younger ministers are overwhelmingly conservative evangelicals, and many of its congregations are closed off from wider society, with a pietistic belief system that has little to say about issues of sectarianism and social justice.

As the outspoken former moderator, the Rev John Dunlop, says, whereas much of the thinking of Northern Catholics remains strongly influenced by anti-Britishness, the equivalent influence among many Northern Protestants is still anti-Catholicism.

Church attendance in Northern Ireland, as everywhere in Europe, is in decline. Belfast is no longer a city where nothing opens on a Sunday and the only entertainment on that day is of the soul-saving type – “a city of religious nightclubs”, to use Methodist leader Donald Soper’s memorable phrase from the 1950s.

No longer is there an atmosphere of cold war between Irish (and British) Protestantism and Catholicism, the kind of atmosphere that saw the Archbishop of Canterbury in 1953 denounce “the oppressions and denials of just liberties which lie at the door of the Roman Catholic Church”.

Relations between the churches have improved hugely since then. In 2004, the Rev Ken Newell, that year’s courageously liberal (and peacemaking) Presbyterian moderator, incurred the wrath of conservatives by inviting the Catholic primate, Cardinal Seán Brady, to its annual general assembly for the first time.

This invitation was not repeated, although there have been other high-level gestures, such as Archbishop of Armagh Eamon Martin’s attendance at a Presbyterian conference on 1916 last year.

Even 30 years ago I estimated that as many as 80 per cent of DUP members would have been Catholic-fearing fundamentalists. A lot has been done, but there is still a lot to do to overcome religious bigotry and fearfulness in the Protestant North.