An Irishman’s Diary on John Templeton, the ‘Father of Irish Botany’ 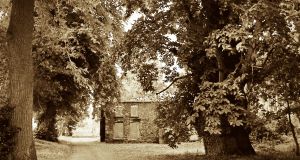 Often referred to as the “Father of Irish Botany”, John Templeton was a gentleman scientist who has largely been forgotten. Born 250 years ago, in 1766, he lived at Cranmore, then on the outskirts of Belfast. Although now derelict, his residence still stands, framed by trees he planted, and is the oldest house in the city.

Templeton’s unpublished diaries, held by the Ulster Museum, are filled with records and drawings, alongside his meticulous handwritten pencilled notes.

They have been explored by a fine-art photographer, Patricia Pyne, who spent three years delving into his life, interpreting the natural history contained in his journals. Her work opens a window on a lost world, forming a remarkable sestercentennial exhibition that retrieves his legacy.

His historic 13-acre garden was designed as an idealised romantic landscape and planted with exotic and native species. Diaries list plants that he acquired from friends, nurseries, botanical gardens and abroad: “Received yesterday a large chest of East Indian plants which I examined today.” He discovered new plants, including a hybrid wild rose at Holywood, Co Down, which he sent to the Royal Dublin Society, winning a prize of five pounds. Modestly he named it Rosa hibernica but many called it “Templeton Rose”.

Today its only known location is Botanic Gardens in Belfast, a park he helped establish; in 1990 the rose was featured by An Post on an attractive postage stamp.

An associate of the Linnean Society, Templeton had a passion for all branches of natural history and agriculture. He was a hands-on farmer whose diaries record well-managed mixed farming. He kept hens, ducks, geese, turkeys and peafowl, closely observing and analysing their behaviour.

Captivated by birds, he was intrigued by the architecture of their nests as well as their song. With a scientist’s exactitude, he noted their dates of arrival and departure. Hundreds of species are mentioned but one in particular, the bittern, which haunted the wetlands around his farm and is now extinct in Ireland, was regarded as a special trophy. His exquisite drawing of it in the Bog Meadows in Antrim demonstrates his artistic skills.

Travelling by coach and on foot, he botanised in the Mourne Mountains, where he climbed Slieve Binnian accompanied by Dr Stokes, professor of natural history at Trinity College Dublin and Mr Mackay, curator of the Botanic Garden.

A more extensive expedition in 1815 reveals his multi-faceted approach, expressed in his powers of observation and occasional rapturous admiration.

From the Antrim coast he made his way to Derry, then via Letterkenny to the northwest highlands, where he climbed Muckish mountain. In south Donegal he sketched a salmon’s determination in leaping the Assaroe Falls at Ballyshannon.

After exploring precipitous Ben Bulben, he crossed the midlands through Mullingar over bogs and hills collecting rare plants.

Near Dublin he cast a farmer’s eye on the ripening wheat, oats and barley, and was excited about finding books in the city: “Entered again with delight Dr Taylor’s library and saw for the first time Wallenberg’s Flora Lapponica.”

Although unpublished, Templeton planned and prepared a Natural History of Ireland and a Flora Hibernica; in 1801 he completed his manuscript Catalogue of Native Plants of Ireland, now in the Royal Irish Academy.

The president of the Royal Society, Sir Joseph Banks, offered him a coveted place on his voyage of scientific exploration to New Holland (Australia) to collect plants and seeds for the Royal Botanic Gardens at Kew, “with a good salary and a large grant of land”.

But Templeton declined because of his attachment to his family and country. The world outside his own doorstep held more than enough curiosity and absorbed him for a lifetime – never mind the fact that he had a wife and five children. Driven by an indefatigable energy, he worked diligently until 1815, when he was hampered by declining health. He became less active and died ten years later, aged 59.

Templeton’s plain gravestone, smothered in ivy, stands in Clifton Street cemetery, which contains the graves of celebrated contemporaries and childhood friends Mary Ann, and her brother, Henry Joy McCracken, a founder of the United Irishmen that once numbered Templeton amongst its members.

At his death, he was regarded as the most eminent naturalist in Ireland, and in later years many others, such as William Thompson, drew on his researches.

Today those who know Templeton’s work classify him as a son of the Enlightenment and a precursor of the Romantic era.

Robert Lloyd Praeger summed up his legacy, saying he “undoubtedly advanced the cause of Irish botany more than any other”.

The exhibition “Out of the Shadows: Capturing the Forgotten Naturalist John Templeton (1766-1825)” is touring selected museums in Northern Ireland. Details at patriciapyne.com