An Irishman’s Diary on James McGregor, ‘the Moses of the Scotch-Irish in America’ 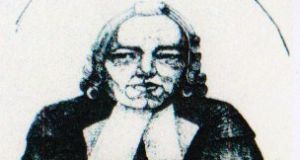 A little-known aspect of Irish emigration to the United States 300 years ago is being commemorated this year. In the spring of 1718 more than 500 people, ranging from babies to a couple aged 90, were preparing to leave their homes in the Bann Valley straddling counties Derry and Antrim to resettle in New England.

The families of Presbyterian farmers and farmer-weavers were known as Scotch-Irish and were desperate to escape a combination of bad harvests, crippling rents, lack of opportunity and religious intolerance. Because of the penal laws passed by the Anglican-dominated Irish parliament, Presbyterians, like Catholics at the time in Ireland, were oppressed.

They were disadvantaged by not being allowed to hold office or public appointments, or to conduct civil ceremonies such as funerals and marriages. Children born of such marriages were regarded as illegitimate.

Links between the northern district of Ireland and America had already been established in the 1680s by two Donegal-born preachers, Francis Makemie and William Holmes. But some compared the early 18th century desire to emigrate as a raging fever. The Anglican Bishop of Dublin wrote of an “unaccountable humor that has possessed the generality of the people”.

The 1718 group which boarded five sailing ships that summer was a determined bunch with a firm purpose. It was led by the redoubtable Rev James McGregor, a minister and fluent speaker of Ulster Irish (a kindred language to Scots Gaelic). He also had a connection to the wider McGregor family since he was reputedly a cousin of Rob Roy MacGregor, the Scottish outlaw who became a folk hero.

As a young boy of 12, James McGregor took part in the siege of Derry in 1689 and is said to have fired a cannon from the top of St Columb’s Cathedral. This signified the fact that a merchant ship, the Mountjoy, had broken the boom that had been built across the river Foyle to prevent supplies reaching the starving Protestants within the walls who were besieged by Jacobite troops.

With high hopes, some of the party set sail on their square-rigged brigantine, Robert, but when they reached Boston, Massachusetts, they were not warmly received by the English Puritans who disliked Ulster Presbyterians. Stigmatised as “Irish”, they were threatened that they would be placed on the tax roll. McGregor protested, saying they were Scots living in Ireland.

The group had planned to stay together but they split up, seeking refuge in various locations such as the coast of Maine (then part of Massachusetts), where they spent a miserable winter after their boat froze in the harbour at Falmouth Foreside. Some, including McGregor, made their way to Nutfield in southern New Hampshire, so called because of its butternut, chestnut and walnut trees. The pastor founded a church in 1719 but was concerned about his safety and the threat of attack from hostile Indians.

Each Sunday he took the precaution of preaching from the pulpit with a loaded gun – although he never had occasion to use it.

In 1722 Nutfield was renamed the township of Londonderry and became a significant settlement with a church, school and meeting house. More than 100 years later, a turnpike road was created and in July 1827, Derry broke away from Londonderry, becoming a separate village.

McGregor, who died in March 1729, made a significant contribution to the Scotch-Irish diaspora and is revered as a pioneer of emigration. The Encyclopaedia of the Irish in America styles him as “the Moses of the Scotch-Irish in America”. In 2014 the Ulster History Circle honoured his name with the unveiling of a blue plaque at Aghadowey Presbyterian Church near Coleraine where he ministered in 1701. Another 21st-century footnote reveals a connection to the higher echelons of American politics. John Kerry, US secretary of state (2013-17) and Democratic nominee in the 2004 presidential election, is the sixth great-grandson – on his mother’s side – of James McGregor.

This year a series of events is planned to mark the tercentenary of that epic life-changing journey to escape persecution. Although only a trickle, it kick-started a wave of emigration, inspiring tens of thousands of others to follow their route across the Atlantic. By the end of the 18th century, a quarter of a million people – one-sixth of the total European population of the US – claimed Scotch-Irish descent, leading to a popular saying: “Brewed in Scotland, bottled in Ulster, uncorked in America”.

As for Rob Roy MacGregor, he too became uncorked. In the 1890s, at the Waldorf Astoria in Manhattan, he was memorialised in the “Rob Roy Cocktail”, named following the Broadway premiere of Rob Roy, an operetta loosely based on his life. Apart from vermouth and a dash of angostura bitters, a vital ingredient in the cocktail mix today is a golden dram of uisge-beatha, a 12-year-old Dewar’s Scotch whisky, known as “The Ancestor”, and said by connoisseurs to have a “touch of smoke on the tail”.