An Irishman’s Diary on Francis Ledwidge, a poet in the making 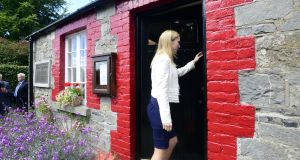 Helen Mc Entee, Minister for European Affairs, at the birthplace of Francis Ledwidge, during the State commemoration ceremony to mark the centenary of poet’s death. Photograph: Cyril Byrne

‘And now I’m drinking wine in France/The helpless child of circumstance./Tomorrow will be loud with war/How will I be accounted for?”

Thus did Francis Ledwidge muse as a soldier in the Great War on his life and ultimately on his death which came on July 31st, 1917 when he was killed by a stray shell during the third battle of Ypres. He was indeed “the helpless child of circumstance”.

Born in 1887 into poverty in a labourer’s cottage in Slane, Co Meath, he was the eighth of nine children. His father died when he was four and his mother laboured in the fields to provide for her growing family.

Francis, or Frank as he became known, had only a basic primary education before he too had to seek work wherever he could find it – on the roads, on farms, as an office worker and in a copper mine.

From an early age he had developed an interest in literature and, in particular, poetry. “Odd halfpennies which I got for some message run for neighbours accumulated in time and were exchanged for The Arabian Nights, Robinson Crusoe, Don Quixote and the poems of Keats and Longfellow”.

He began writing poetry while still in school but it was only when he came under the patronage of Lord Dunsany that he really flourished.

As his brother Joe recalled, “Frank had access to Dunsany’s library and Dunsany became like a kind of brother to him”.

Seamus Heaney suggests that Dunsany’s contribution (to Ledwidge)” was a generous and selfless act”, boosting the young poet’s confidence and reputation.

Joe Ledwidge also remembers that his brother was a political animal at a young age. He was fired from the copper mine when he tried to organise the workers in a union. He was a supporter of the nascent Sinn Féin and joined the separatist Irish Volunteers in 1913.

A year later, to the surprise of many, he enlisted in the Royal Inniskilling Fusiliers on the outbreak of war.

He explained his move thus – “I joined the British Army because she stood between Ireland and an enemy common to our civilization and I would not have her say that she defended us while we did nothing at home but pass resolutions . . .”.

Seamus Heaney in his poem In Memoriam – Francis Ledwidge, refers to the poet as “our dead enigma” and sees him as an example of the ‘poet as witness’, having ‘ a visionary, noble, moral side to his nature’.

Ledwidge was certainly witness to the horrors of war, seeing action in the disaster that was Gallipoli – “It was Hell! Hell! No man thought he would ever return” -, in Serbia where he was injured and ultimately in France.

Yet all those horrors never impinged on his poetry. Instead he wrote about home, love (he was unlucky here also), nature and friendship. He became known as ‘the poet of the blackbird’.

Heaney explains that most of the poetry written in the trenches was the “poetry of pastoral recourse”, ie, you compensate for the horrific conditions by remembering pre-war pastoral Eden-like conditions.

Ledwidge is best remembered today for his moving lament for Thomas McDonagh (“He shall not hear the bittern cry . . .”), June and Behind the Closed Eye (when, tiring of Dublin city, he walked home to Slane). In all, three collections of his poems were published – Songs of the Fields (delivered to him in the trenches of Serbia), Songs of Peace and Last Songs (posthumously).

In his poem On Dream Water, Ledwidge says “And I was wondering in my mind/ How many would remember me”.

It is probably true that only an older generation remembers him now and that more recent generations have never heard of him. But he will be remembered in this centenary year. Books will be published, An Post will issue a commemorative stamp and today (July 31st) Friends of Francis Ledwidge will gather at his grave in Ypres to honour the memory of what Seamus Heaney called “a tender, beautiful figure, walking in the mist of melancholy’.

John Quinn is a writer and former radio broadcaster. His most recent book is A Little Book of Ledwidge – a selection of the poems and letters of Francis Ledwidge, with an assessment by Seamus Heaney, (Veritas).