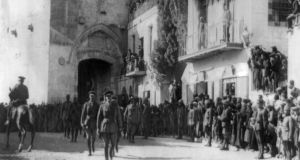 A hundred years ago this week, Gen Edmund Allenby of the Egyptian Expeditionary Force entered the captured city of Jerusalem

One hundred years ago this week, Gen Edmund Allenby of the Egyptian Expeditionary Force entered the captured city of Jerusalem.

It was the culmination of a month-long campaign known as the Third Battle of Gaza. Allenby entered the holy city on foot, an act of humility and in contrast to Kaiser Wilhelm II who had entered the city on a white charger almost 20 years previously.

For the first time in 400 years, Jerusalem was in Christian hands.

Everybody understood the momentous and potentially delicate nature of the occasion. British newspapers, the British War Office and Allenby himself were warned not to describe it as a “crusade”, given the pejorative nature of that word in the Muslim world. Nevertheless, the British press referred to it as that.

Conscious of the need not to be seen as an invader, Allenby promised “every sacred building, monument, holy spot, shrine, traditional site, endowment, pious bequest, or customary place of prayer of whatsoever form of the three religions will be maintained and protected according to the existing customs and beliefs of those to whose faith they are sacred”.

The capture of Jerusalem stunned a weary British public. For them 1917 had been a dreadful year culminating in the debacle of Passchendaele. The battle of Cambrai which followed afterwards had early successes, but ended ultimately in failure.

Italy had almost fallen. The Bolsheviks had begun the process of withdrawing Russia from the war. The French had mutinied.

Little wonder the British prime minister David Lloyd George called the capture of Jerusalem “an early Christmas present for the British people”. A month previously the British government had issued the Balfour Declaration pledging its support for a homeland in Palestine for the Jewish people – a decision which is as pertinent today as it was then.

Neither the Ottoman Turks nor the British wanted to be responsible for shelling a city sacred to half the world’s population at the time.

The 10th (Irish) Division were among the vanguard of the force that captured Jerusalem.

After the debacle of Gallipoli in 1915, the division was sent to Salonika where it had a relatively quiet time. That ended in September 1917 when it was sent to Alexandra in Egypt in preparation for the coming offensive in Palestine.

This mixed division, evenly divided between Catholics and Protestants, was united by the piety of all the men who were conscious that they were now in biblical lands.

In late October and early November 1917 Allenby’s troops captured Gaza and Beersheeba, the latter being a town founded by Abraham, the father of the Jewish faith.

The capture of Gaza was assigned to Dublin man Gen Edward Bulfin the commander of XXI Corps and the highest-ranking Irish Catholic in the British Army during the war.

Previous offensives in Gaza had foundered on the lack of the most basic commodity – water. The capture of the wells at Beersheeba by the Irish was a vital logistical exercise.

The way was then clear for the assault on Jerusalem. The city, which has been fought over for millennia, fell after a single day. Instead of attacking Jerusalem, Allenby’s men surrounded it, and its Ottoman defenders fled north.

Two days later Allenby entered Jerusalem. A guard of honour was provided from men from all the Allied nations, but there was no sense of triumphalism.

In a more religious age, the occupiers of Jerusalem were conscious of walking in the footsteps of Christ, none more so than the Redemptorist priest from Limerick Fr Bernard Kavanagh.

Fr Kavanagh was one of 11 Irish Redemptorists who volunteered as chaplains in the war. He was 50 in 1914, in poor health and under no illusions as to the consequences of leaving his relatively comfortable life behind. As a hospital chaplain in Alexandra, he had witnessed how bombs and bullets had destroyed so many young men. “I have jammed dozens into the ground by night and scraped a little earth on top of them,” he wrote to his sister.

Jerusalem provided a modicum of comfort for him – a bed and a roof over his head after the exertions of previous weeks.

He again wrote to his sister. “Today I walked over to Bethany and saw the veritable tomb of Lazarus and the house of Martha and Mary. From where we are now the view of Jerusalem is indescribably beautiful, the spot is pointed out where Jesus wept over the city.”

Fr Kavanagh never lived to see his first Christmas in the Holy Land. On December 21st at the Mount of Olives, on that very site where Christ wept before his crucifixion, Fr Kavanagh was shot by a Turkish sniper.

He died later of his wounds at the age of 53. According to The Irish Times, his death was “regretted by a large circle of friends in Ireland and England”.

He is buried in Jerusalem Military Cemetery, overlooking the Mount of Olives.

The loss of Jerusalem was a severe blow to the Central Powers.

They counterattacked in force and throughout the Christmas of 1917, the Irish endured a torrid time.

Two days after Christmas a stretcher-bearer from the 6th Inniskillings, Pte James Duffy, went out under heavy fire twice to rescue men from the battlefield in the hills northwest of Jerusalem.

He was awarded the Victoria Cross for his bravery, the only Donegal man in the war to win the highest honour.

His VC, which is in the Royal Inniskilling Fusiliers’ museum in Enniskillen, will go on display in the Donegal County Museum on Thursday.