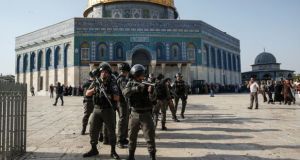 Israeli security forces in front of the Dome of the Rock in the Haram al-Sharif compound in the old city of Jerusalem. Photograph: Ahmad Gharabli/AFP/Getty Images

This statement clearly implies that the Jewish leadership went to war to form the State of Israel.

However, on November 29th, 1947, the UN General Assembly voted to accept resolution 181 which called for the partition of what was then the British-ruled Palestine Mandate into a Jewish State and an Arab State. Subsequently, on May 15th, 1948, the day after David Ben Gurion declared the formation of the State of Israel in its ancient homeland, the armies of Egypt, Syria and Jordan declared war and invaded the fledgling state. What followed was Israel’s defensive war of independence. – Yours, etc,

1 Man tested for symptoms linked to coronavirus in Belfast
2 A vegetarian and a non-drinker visit Ireland: here’s their verdict
3 Fintan O’Toole: Historians will not believe sheer ignorance of Brexit supporters
4 Cycling or swimming, walking or yoga: What is the best exercise for you?
5 Child (4) died of viral infection following nap at Cork creche
Real news has value SUBSCRIBE