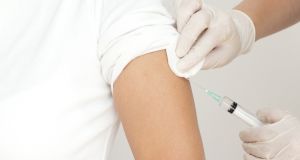 The minister for health was urged to intervene, and one letter warning him to act ‘before the polio of Corkonians is laid upon us’

Mid-to-late September in Ireland is peak season for the condition known as “football fever”, with Mayo and Dublin the high-risk areas of 2016. But 60 years ago this weekend, that problem was less acute than usual. The GAA’s showpiece was still three weeks away, in early October. Even the hurling final hadn’t happened yet. It was similarly postponed, until September 23rd.

The reason for the out-of-kilter calendar was an all-too-real health scare: a polio epidemic. And to the overall misfortune of that was added a coincidence nobody in Dublin welcomed: two All-Ireland finals involving the county at the centre of the outbreak – Cork.

In fact, the first warning of what was to come in 1956 had been from Waterford, in February. A case in Tralee followed, and it was June before the disease hit Cork. But by mid-July, St Finbarr’s Hospital there was reporting four new cases a day.

Panic gripped the southern city that summer, as people feared death or paralysis from a disease known to affect the young especially, but otherwise little understood. Swimming in the river Lee was banned. So were most soccer matches. At a byelection in August, barely half the electorate turned out.

Among the children who contracted polio was future journalist Patrick Cockburn, son of Claud, (who later wrote for this newspaper). Living in Youghal, in an isolated lodge, the family had thought themselves safe.

But Cockburn snr’s visits to the city were their weak link. One day he developed a headache and a prickly sensation, which he soon shrugged off, as most people who get the polio infection do. In the meantime, however, he had been a carrier, with drastic effects for his six-year-old son.

In a 2005 memoir, Patrick Cockburn recalled his years of paralysis (he recovered by age 10). He also described the terror that gripped Cork that summer: empty streets and shops, a fear among visitors that reminded his father of people going to London during the blitz.

But as well as being themselves afraid, Leesiders were a source of fear for others. On trains to Dublin, Cockburn snr noticed people moving seats when they heard Cork accents.

So as the 1956 GAA season reached its climax, with Cork prominent in both codes, Dublin feared the worst. Croke Park’s decision to ban children from the Cork-Kildare football semi-final did not disarm critics. The minister for health was urged to intervene, and one letter warning him to act “before the polio of Corkonians is laid upon us”.

The country’s footballers had hoped to play a friendly before the final, but opponents Offaly refused to travel. Almost all Cork schools, meanwhile, postponed reopening until mid-September. And the GAA too was forced to relent too, eventually.

Polio is assumed to be an ancient disease. But for most of history, as Dr Kevin Connolly of the National Immunisation Advisory Committee explains, people were exposed while young and unknowingly immunised.

It was only with the improved hygiene of modern times, ironically, that the disease became a threat. As the Cockburns discovered, their middle-class lifestyle – they had just arrived in Ireland from one of London’s leafier suburbs, Hampstead – made them vulnerable. If you lived in the poorer, overcrowded parts of 1950s Cork, you were likely immune.

But even the manner of infection – faecal-oral, from contaminated food or fingers – was still unclear then, says Dr Connolly, with many other things blamed, including “parcels from America” (old clothes sent by relatives).

The US was itself prone to annual polio panics. Even as the one in Cork unfolded, Chicago had a similar experience. But there was good news imminent from that country too. Jonas Salk had recently produced a vaccine that seemed to work. It would be trialled in Ireland from 1957, with dramatic success.

In the interim, the 1956 epidemic officially involved 499 patients, 220 of them in Cork, with 20 known deaths. For every case detected, however, there could have been 100-200 others who were potential carriers. Patrick Cockburn suggests the entire population of Cork was infected that year.

As for their All-Ireland finals, they lost both – to Wexford in the hurling, Galway in football. The hurling was also notable as the last final played by Christy Ring. And Ring’s farewell at least illustrated that not everybody feared contact with Corkonians. His countless admirers included two Wexford players, Nick O’Donnell and Bobby Rackard, who carried him off the field on their shoulders.